SEOUL, March 4 (Yonhap) -- About 4.5 million face masks have been found illegally hoarded in distributors' warehouses in areas around Seoul, police said Wednesday, as the rapid spread of the new coronavirus has caused a severe shortage of masks and other hygiene products.

According to the Gyeonggi Nambu Provincial Police Agency in Suwon, south of Seoul, 59 distributors have been caught hoarding 4.49 million face masks and about 100,000 bottles of hand sanitizer in warehouses in Incheon and Gyeonggi Province, which surrounds the capital.

The number of masks uncovered in the police crackdown jointly conducted with the Ministry of Food and Drug Safety is about half of the nation's daily mask output of 9 million units, the agency said. 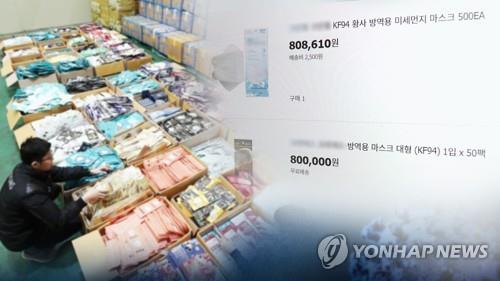 The COVID-19 outbreak, which has infected 5,328 people and killed 33 in South Korea as of Wednesday, has caused severe shortages of face masks, forcing citizens across the country to wait for long hours at designated locations to buy the protective hygiene product.

As part of efforts to increase the supply of masks, the authorities have intensified their crackdown on illegal hoarders, who can face a prison sentence of up to two years or a maximum fine of 50 million won (US$42,140).

Producers and distributors are banned from storing face masks and hand sanitizer exceeding 150 percent of the previous year's average monthly sales for more than five days.

Police accused most of the distributors caught in the latest crackdown of keeping the massive amount of masks in their warehouses for longer than 10 days.

They said 46 were caught Tuesday keeping 3.67 million masks in 21 warehouses in Incheon, west of Seoul, for more than five days.

One company was found hoarding 285,000 masks for a long time at an Incheon warehouse, while another was caught storing 130,000 masks at a location in Seongnam, south of Seoul, for over 10 days.

The Gyeonggi police agency said it has ensured all the illegally hoarded hand sanitizer and masks are handed over to the food and drug safety ministry for swift distribution on the market, adding the suspected hoarders will face stern investigations.

The agency also noted it is currently investigating a further five companies over suspected hoarding.

Meanwhile, Prime Minister Chung Sye-kyun vowed Wednesday to step up the government's intervention in the supply of face masks to ease the shortage.

"The government will consider introducing a system similar to rationing in the distribution of masks, if its intervention is additionally necessary," Chung said in a news conference in Daegu, the southeastern city hardest hit by the coronavirus outbreak.

"If the pubic distribution channels for masks are not working properly, the government will have no choice but to increase its interventions," said Chung, who came to Daegu nine days ago to oversee the ongoing fight against the potentially deadly viral disease.