SEOUL, March 4 (Yonhap) -- Hanjin KAL Corp., the holding company of logistics-centered Hanjin Group, recommended the group's heir apparent as a member of its boardroom ahead of a vote showdown this month amid a family feud over the throne of the group.

"The recommendations are aimed at seeking stability in management structure under the chairman's leadership and improving the group's financial status amid growing uncertainties," the statement said. 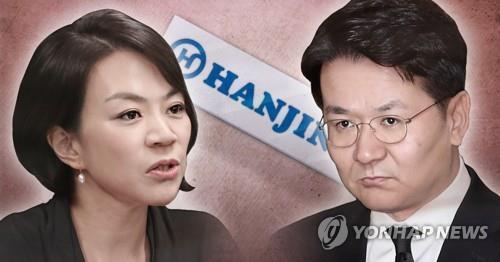 The suggestions for the two executive director posts are subject to approval at a shareholder meeting on March 27.

Hanjin KAL directors have also proposed doubling the number of outside directors to eight in a bid to enhance governance structure and secure transparency in management decisions.

Since taking over the helm of Hanjin Group last April, Chairman Cho Won-tae, 44, has been involved in a family feud following a rebellion led by his older sister Hyun-ah over control of the airline-to-logistics conglomerate.

Hyun-ah, 45, known for her "nut rage" incident in 2014, formed an alliance with the homegrown Korea Corporate Governance Improvement (KCGI) fund and local builder Bando Engineering & Construction Co. in January to challenge her brother's management of the group.

Hyun-ah has been at loggerheads with her brother Won-tae and other family members over the way of managing the airline-to-logistics conglomerate.

The alliance has argued that inviting a professional manager will help improve the group's management, financial status and shareholder value.

KCGI said the three-party alliance's combined stake in Hanjin KAL rose to 37.8 percent from 32.06 percent as of Feb. 20.

The alliance can exercise voting rights over a 31.98 percent stake they purchased last year at this year's shareholders' meeting, Korean Air said.

The airline stocks got a boost as investors expect the Hyun-ah alliance's challenge to the current leadership to help improve the group's governance structure, analysts said.