SEOUL, March 5 (Yonhap) -- South Korea has decided to postpone the rotational deployment of a new contingent of troops to South Sudan and extended an emergency working system for service members in the southeastern city of Daegu over the continued spread of the coronavirus, the defense ministry said Thursday.

"In consideration of the COVID-19 situation at home and abroad and other circumstances comprehensively, we are reviewing adjusting the replacement timing, which was originally planned for March," ministry spokesperson Choi Hyun-soo told a regular briefing.

As of Thursday, South Korea had 5,766 confirmed cases of the novel coronavirus, including 35 deaths, according to the Korea Centers for Disease Control and Prevention (KCDC). 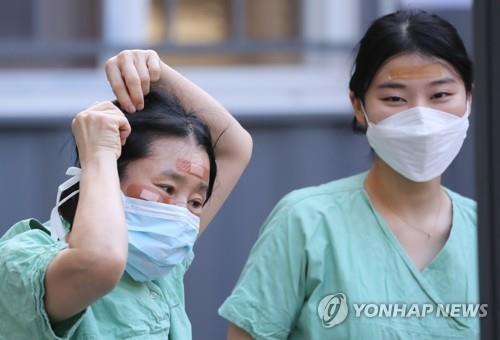 The number of infections in the military remained at 34, including four civilian workers. Of them, one was released after fully recovering, becoming the first such case in the military, according to the authorities.

The ministry plans to extend an emergency working system for service members stationed in Daegu, the local epicenter for the virus, for about a week, according to the spokesperson.

Last week, the ministry launched a weeklong working system for staff in Daegu under which non-essential officers should work at home or designated facilities while core personnel are to stay at their bases on-call.

Of the total confirmed cases in the country, 4,326 patients, 75 percent, are Daegu residents, with a cluster of infections linked to the Shincheonji Church of Jesus.

The Military Manpower Administration (MMA) decided to extend the suspension of medical examinations of potential conscripts for another two weeks until March 20. The examinations are meant to determine whether the young men are fit for mandatory military service.

But the enlistment of draftees residing in Daegu and the adjacent county of Cheongdo will be resumed next week after the two-week suspension implemented in the wake of the initial fast spread of the virus, according to the defense ministry.

"Regardless of the resumption, those who want to delay their enlistment will be allowed to do so. The new recruits from the region will also be separated from other draftees for the first two weeks as a prevention step," the ministry said in a release.

The Korea Military Academy was to hold this year's commencement and commissioning ceremony in a scaled-back manner on Thursday, without inviting parents of the new officers and other guests.

Around 5,920 service members are quarantined at their bases. Of them, around 1,120 have either shown symptoms or had direct contact with infected patients, while the remainder recently visited Daegu, North Gyeongsang Province or virus-hit foreign countries such as China, Hong Kong, Macao and Japan.

To support the government's all-out battle against the virus, a military hospital in Daegu began accepting civilian patients on the day.

After days of renovation work, the hospital has been equipped with 303 beds and facilities necessary for coronavirus patients, and a total of 432 medical staff were assigned there. Previously, 196 medics worked for the hospital, according to the ministry. 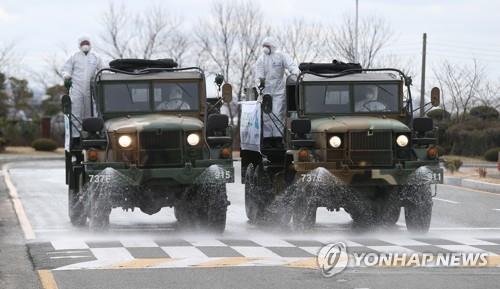