Last week, the U.S. raised its travel advisory for Daegu to Level 4, the highest level, urging Americans not to travel to the southeastern city most affected by the COVID-19 outbreak in South Korea.

The rest of South Korea remained under Level 3, which means "reconsider travel."

"The fact that the highest level travel advisory has been restricted to the Daegu region and not to all of Korea shows the U.S. government's recognition of South Korea's effective measures to contain the outbreak," said Jeffrey Jones, chairman of the board of governors at the American Chamber of Commerce in Korea.

Jones and AMCHAM Chairman James Kim said South Korea has been proactive and transparent in reacting to the virus outbreak and that the high number of confirmed cases is due to the thorough testing procedures of the Korean government compared to other countries.

South Korea has the second-highest number of confirmed coronavirus cases after China. It had reported a total of 5,766 cases as of Thursday, with the death toll at 35. 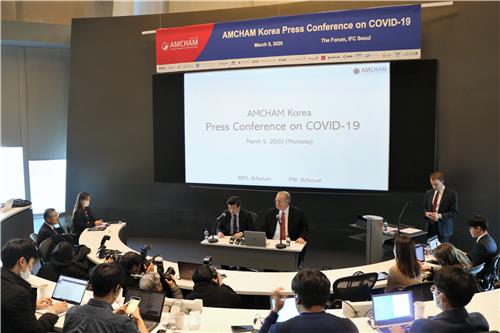 As for the impact of the spreading virus outbreak on U.S. businesses in Korea, AMCHAM said about 80 percent of its member companies expect to report a loss in revenues for the first quarter due mainly to a decline in purchases by customers or clients.

AMCHAM member firms have taken measures to minimize the negative impact of the virus on their operations, such as the usage of cloud computing, the distribution of masks and sanitary equipment and extension of loan paybacks for small and medium-sized enterprises, the statement said.

"We at AMCHAM have complete confidence that the Korean government is undertaking every possible measure to confront the situation and restore normalcy," the chairman said.

AMCHAM expects no U.S. travel ban for all of S. Korea

AMCHAM expects no U.S. travel ban for all of S. Korea