SEOUL, March 5 (Yonhap) -- The National Assembly on Thursday voted down a bill intended to loosen the eligibility requirement for the largest shareholder of an internet-only bank.

A revision of the Act on Special Cases Concerning Establishment and Operation of Internet-only Banks failed to pass in parliament, as 82 of 184 lawmakers on hand in the plenary session voted against it. Only 75 lawmakers voted for the bill while 27 abstained. 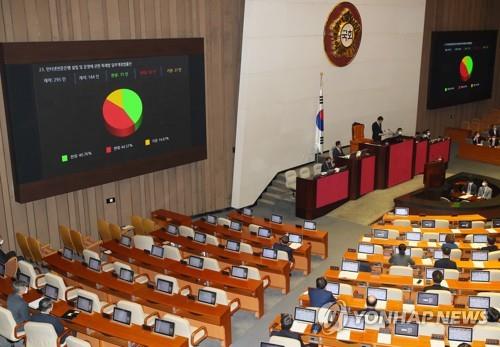 The revision bill calls for removing a record of antitrust and taxation law violations from the eligibility requirement for the largest shareholder of an internet-only bank. Its passage could have paved the way for telecom giant KT Corp. to become the largest shareholder of K-Bank, an internet-only bank launched in 2017. KT has a record of violating the fair trade law.

A lawmaker of the main opposition United Future Party spoke in favor of the revision bill, saying it would help upgrade the competitiveness of the nation's financial industry.

But many lawmakers from the ruling Democratic Party and minor parties opposed the revision bill, calling it a favor to KT Corp.