SEOUL, March 5 (Yonhap) -- After spending more than a decade in Europe, South Korean veteran midfielder Lee Chung-yong has come home with a simple, if easier-said-than-done, goal on his mind: to win a championship.

Lee agreed to a three-year deal with Ulsan Hyundai FC of the K League 1 on Tuesday. Lee made his pro debut with another K League outfit, FC Seoul, in 2004, and played the past 11 years in England and Germany before returning to his native land. His previous club was VfL Bochum in the second-tier 2. Bundesliga.

At his introductory press conference at the Korea Football Association (KFA) House in Seoul on Thursday, Lee thanked Ulsan for giving him the opportunity to play before Korean fans again. 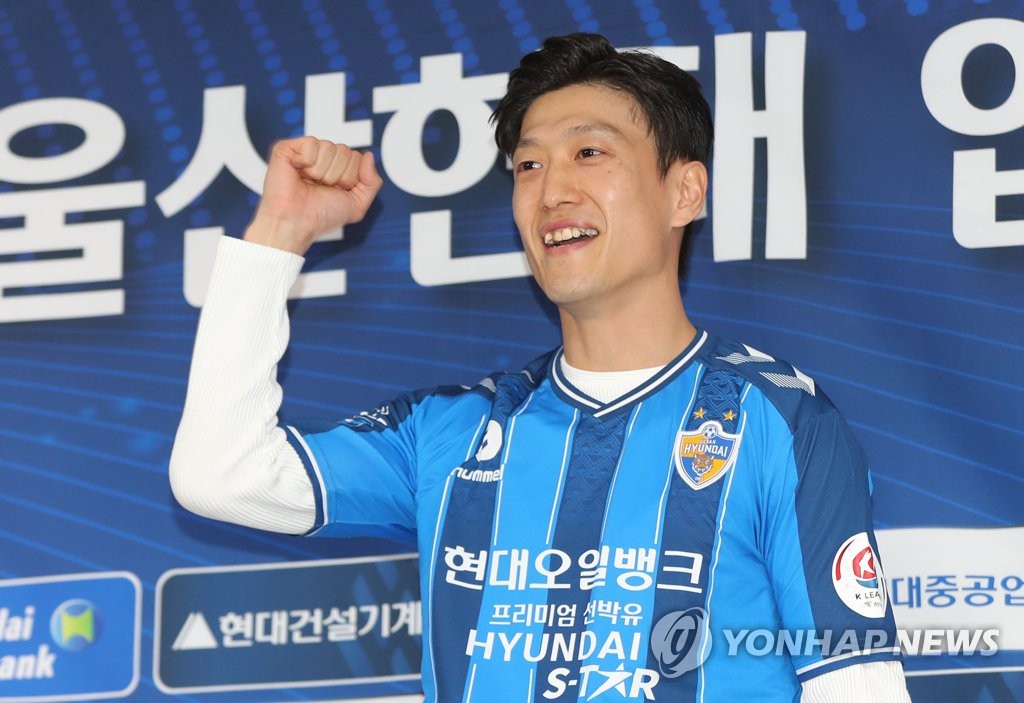 "One of the reasons I signed with Ulsan is that I want to win a championship," Lee said. "Obviously, it's premature to talk about winning titles before we've even played a match. I'll go out there and play my best week in and week out, and I think good results will follow. I still play with the same kind of urgency and desperation that I did all those years ago."

Last year, Ulsan came oh-so-close to winning their first title since 2005. They were in first place heading into the last day of the season, but suffered a devastating, 4-1 loss to Pohang Steelers in the finale. Jeonbuk Hyundai Motors leapfrogged them to their third straight title thanks to a 1-0 win over Gangwon FC.

Ulsan made some significant moves to try to contend for the title again. Before acquiring Lee, they signed national team goalkeeper Jo Hyeon-woo and crafty midfielder Yoon Bitgaram.

Lee said he understands the pressure that comes with the type of contract he signed -- the team said it's the largest in club history, without divulging financial terms -- but he's ready to embrace it.

"Fans will always have high expectations, but athletes have to live with it," he said. "I think it will force me to be more responsible and better prepared."

Lee revealed that Ulsan had first approached him "a few years ago" while he was still with Crystal Palace in the Premier League. Lee wasn't seeing much action with the club, but he said he still wanted to stick around in Europe to see how well he could keep playing against that competition.

This time around, Lee said he no longer had regrets about leaving Europe. 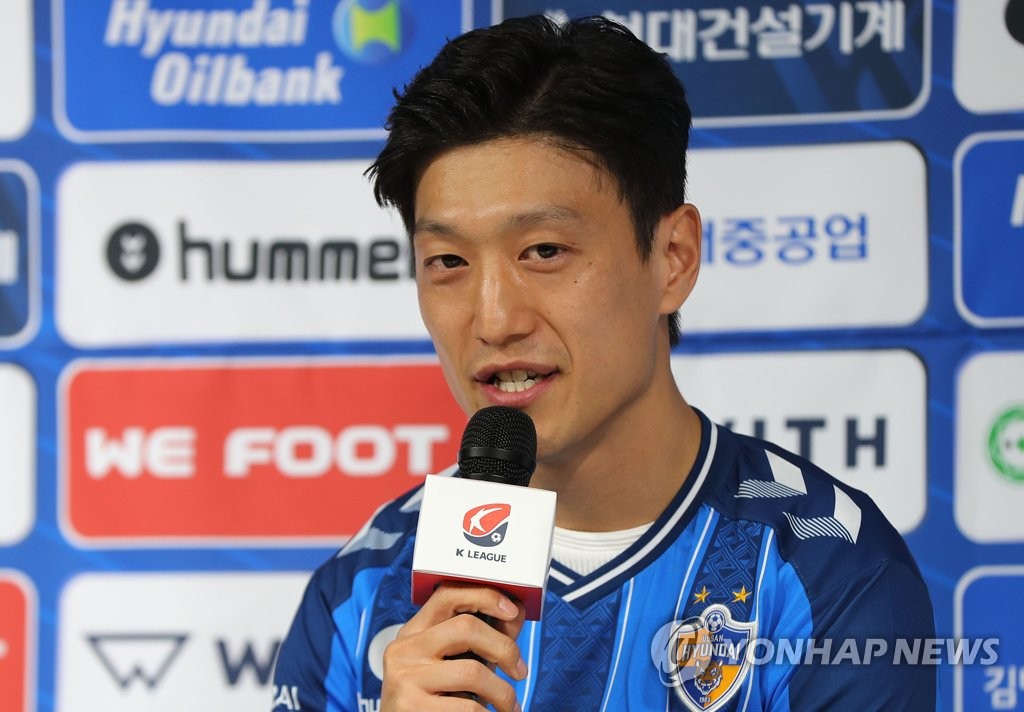 "When I was trying to decide where I should sign, that history I had with Ulsan and gratitude I felt back then played a role," Lee said. "Ulsan have put together a great squad. I don't even know if I deserve all the love and support I got from this club."

Per an agreement he had with FC Seoul when he left them in 2009 for Bolton Wanderers, Lee had to negotiate with FC Seoul first if he wanted to return to the K League.

Lee said rejoining FC Seoul -- a team that signed him out of middle school and developed him in their youth academy -- was his "No. 1 priority" but things just didn't go that way.

"A lot has to go right if you want to end up with the team of your choice," Lee said. "We had our differences but we also respected each other."

For signing with another club, Lee owes FC Seoul a fee, reportedly about 600 million won (US$507,680). Because Ulsan paid Bochum a transfer fee to pluck him off their roster, the penalty fee is between Lee and FC Seoul.

A similar agreement proved to be the deal breaker when Lee's former FC Seoul teammate, Ki Sung-yueng, sought to rejoin the team last month. After his initial talks with FC Seoul fell through, Ki negotiated with another K League team, Jeonbuk Hyundai Motors. Because Ki was a free agent after getting released by Newcastle United, Jeonbuk had to pay FC Seoul for acquiring Ki. And Jeonbuk balked at the amount -- reportedly 2.6 billion won -- and Ki ended up signing with Spanish club RCD Mallorca. 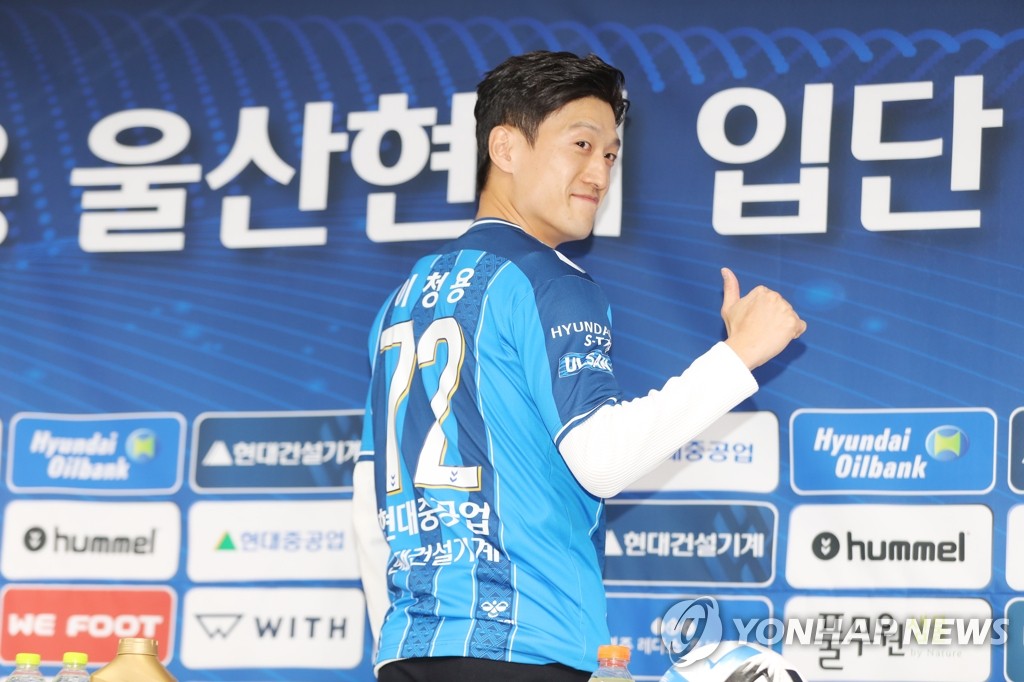 Lee said he didn't want to discuss his situation with FC Seoul on Thursday but added, "I didn't want to miss the opportunity to play before Korean fans, and I am sure FC Seoul would understand that."

Lee said Ki reached out and congratulated him on his return to the K League, and said he was hoping to see his former teammate back in the same league.

"Hopefully, he'll have a chance to play here again," he said. "Sung-yueng is a special player. For someone like that to play in the K League will be really significant."

Midfielder back home from Europe to win championship

Midfielder back home from Europe to win championship