SEOUL, March 6 (Yonhap) -- Kim Kwang-hyun of the St. Louis Cardinals has extended his scoreless streak to five innings in his first major league camp, adding two shutout frames to the books in his third appearance.

The South Korean left-hander struck out two and pitched around three singles to keep the New York Mets off the board at Roger Dean Chevrolet Stadium in Jupiter, Florida, on Thursday (local time). He threw 18 of his 25 pitches for strikes.

Kim, battling for a rotation spot at the start of the regular season, has pieced together five shutout innings so far this spring in one start and two relief appearances. He has seven strikeouts against one walk, with three hits allowed. 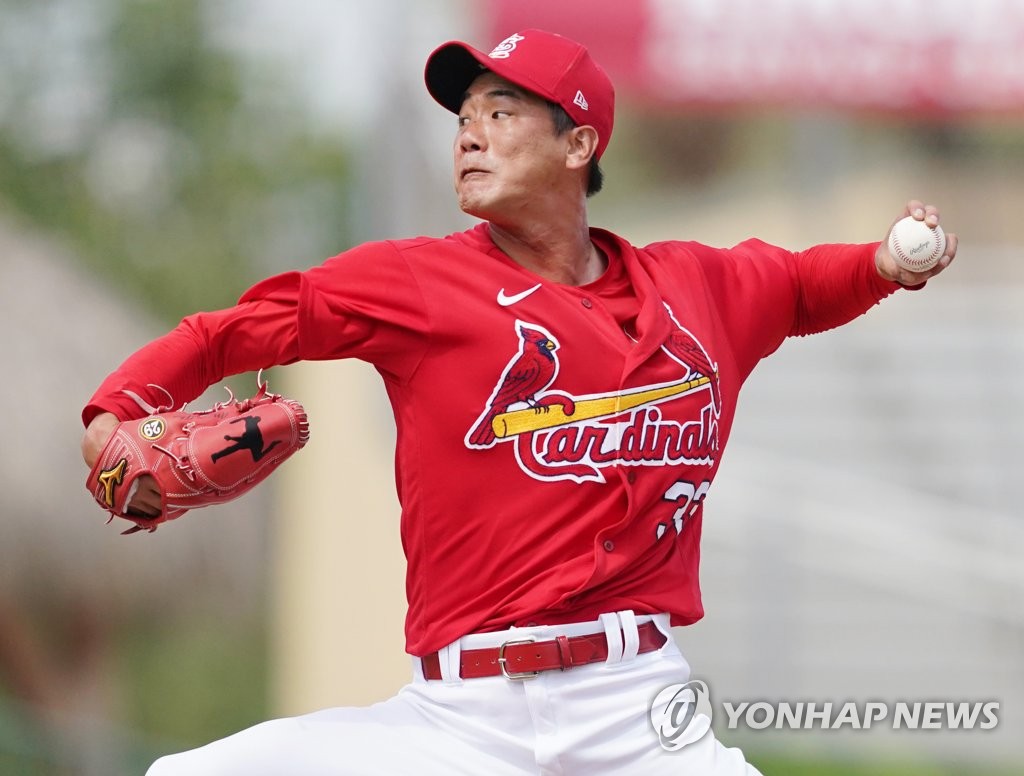 Kim had been scheduled to start Monday but was scratched because of mild groin soreness. He threw a successful bullpen session later that day, and the Cardinals had him lined up to start Thursday and throw three innings or 50 pitches.

But on the eve of the scheduled start, the Cardinals said veteran right-hander Adam Wainwright would get the start instead and Kim would immediately follow him with two innings out of the bullpen.

Kim took over from Wainwright to begin the top of the fifth, with the Cardinals ahead 6-5 after a three-homer, six-run explosion in the bottom fourth.

Kim gave up a leadoff single to Pete Alonso with his first pitch of the day. It was also the first hit off Kim all spring, but the lefty quickly settled down and retired the next three batters in order.

Dominic Smith grounded out to first as Alonso move to second, and then Ryan Cordell flied out to center on a 1-2 fastball.

Kim put on a clinic in striking out Tomas Nido on three pitches. He flipped in a curveball for a first-pitch strike at 69 miles per hour (mph), and got a swinging strike with an 85 mph slider. Nido then fanned on an 88 mph fastball in the dirt.

Kim struck out Will Toffey swinging on a 2-2 slider to begin the top of the sixth, but Jarrett Parker got an infield single to start a rally and moved to third on a follow-up single by Johneshwy Fargas.

Kim wiggled out of the jam unscathed. First, he got Amed Rosario to fly out to center, not deep enough to bring Parker home from third.

With Luis Carpio at the plate, Fargas stole second to get himself into scoring position. But Carpio hit a grounder back to Kim, who tossed it to first base to finish off the inning.

Kim offered four different pitches from his arsenal: four-seam fastball (11), slider (10), curveball (three) and change-up (one). His fastball topped out at 93 mph.

Kim, who signed with the Cardinals in December, was a high-end starter for the SK Wyverns in the Korea Baseball Organization (KBO) for most of his 13-year career. Kim has said he'd be willing to pitch out of the bullpen if necessary, and the Cardinals could give him some looks as a reliever given the absence of veteran left-hander Andrew Miller, who's dealing with a mysterious ailment with his arm.