SEOUL, March 6 (Yonhap) -- South Korea said Friday it will halt a visa-free entry program for Japan and take other countermeasures in response to Tokyo's decision to impose new restrictions for South Korean visitors over coronavirus fears.

"Our government once again expresses our deep regrets over Japan's measures that it unilaterally announced without prior consulations or notification," Cho told a press conference.

"It is difficult to accept the fact that Japan, which has shown opaque, passive quarantine moves, has unilaterally taken stronger entry restrictions against our citizens," he added. 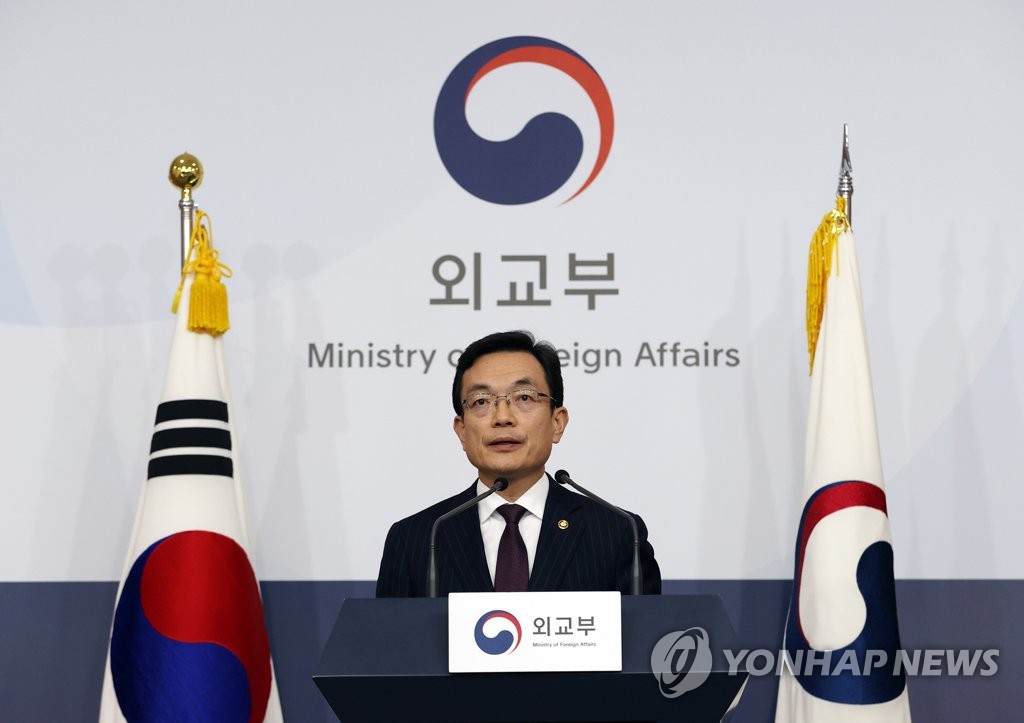 Cho went on to stress that Japan's measures stemmed from a "lack of understanding" over South Korea's "advanced, outstanding" quarantine system.

Korea's countermeasures include the plan to suspend the 90-day visa-fee entry program for Japanese visitors and invalidate already issued visas from midnight Monday.

In addition, Seoul warned of "reciprocal" measures in response to Japan's decision to allow flights from South Korea to land only in Narita Airport near Tokyo and Osaka's Kansai Airport. It plans to choose Korean airports in Incheon, west of Seoul, Gimhae or Jeju to impose its own restrictions for flights from Japan.

It is unusual for the minister to hold such a meeting with a foreign envoy to file a complaint, illustrating the seriousness South Korea attaches to the issue. Initially, Vice Foreign Minister Cho was to meet Tomita.

"I express deep regrets over the fact that the Japanese government has taken such unreasonable steps although our government has been strictly controlling and managing the COVID-19 through an excellent quarantine system recognized by the world," Kang said.

"We cannot help but deplore the measure that Japan has pressed ahead without prior notification as well as sufficient consultations despite our repeated calls to refrain from additional measures," she added.

The minister raised doubts over the motivations behind Japan's latest restrictions, stressing that the measures came when South Korea's containment efforts are yielding progress.

"Japan's measures this time are not only unfriendly but also unscientific, and I strongly urge Japan to promptly retract them while facing the objective facts and situations," Kang said.

The minister also stressed that Korea's "objective" data, including the high number of COVID-19 tests, underscores the country's "active and preemptive" quarantine efforts rather than any failure to contain the virus.

"Rather, our government is watching Japan's response to COVID-19 with concern," Kang was quoted by her ministry as saying.

Tomita said in response that he would relay Kang's remarks to the Japanese foreign ministry.

"As you might be well aware of the situation in Japan regarding the new coronavirus, the next one or two weeks is a critical juncture that could determine whether the virus outbreaks can end," he said.

Earlier in the day, the presidential office Cheong Wa Dae also expressed "strong regrets" over Japan's measures, after it convened a standing committee session of the National Security Council (NSC).

In the morning, the foreign ministry issued a strongly-worded statement, voicing "extreme regret" and raising doubts over Japan's intentions behind the restrictive measures.

South Korea has so far reported 6,593 confirmed cases of the novel virus and 42 deaths. As of 3 p.m. Friday, 102 countries and territories planned to enforce or were imposing entry restrictions or stricter quarantine programs for people from South Korea.