SEOUL, March 6 (Yonhap) -- All government organizations in South Korea have been operating emergency situation rooms 24 hours a day since earlier this week to swiftly cope with the coronavirus outbreak, authorities said Friday.

The Central Disaster and Safety Countermeasures Headquarters said that the 24/7 operations at all government organization emergency situation rooms began Wednesday and will continue until the COVID-19 crisis is over.

The rare emergency footing by all government ministries and agencies was ordered by President Moon Jae-in during a Cabinet meeting Tuesday to step up quarantine measures and overcome the economic and other difficulties caused by the spread of the viral disease, the headquarters said. 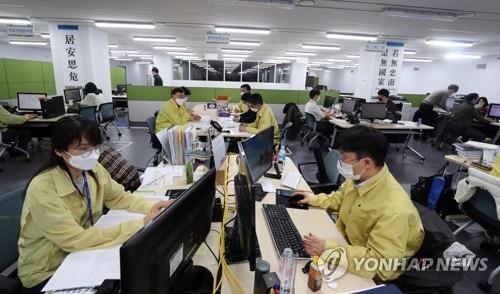 As of early Friday morning, the nation had reported 6,284 coronavirus infections and 42 deaths, rises of 518 and seven, respectively, from a day earlier, according to official government data.

Under the emergency posture, the education, justice, defense and foreign ministries, which had already established emergency situation rooms before this week, will have their ministers head their situation rooms.

Other ministries and agencies have opened their own emergency situation rooms this week, the headquarters said.

All the situation rooms will closely communicate and cooperate with the central disaster headquarters, the Central Disease Control Headquarters and other pan-government organs 24 hours a day, seven days a week, it noted.

In addition, ministers and vice ministers will increase their field visits related to quarantine operations and public livelihoods, it added.

"The coronavirus outbreak has posed a serious threat to our country's quarantine system. We need closer cooperation than ever among relevant government organizations," Minister of the Interior and Safety Chin Young said, calling for concerted efforts for economic recovery.