According to the National Human Rights Commission of Korea (NHRCK), its poll of 1,378 employees at three major sports organizations found that 34.1 percent of them have experienced being harassed at their workplaces over the past year.

Notably, as many as 45.5 percent of female respondents said they experienced harassment at work. 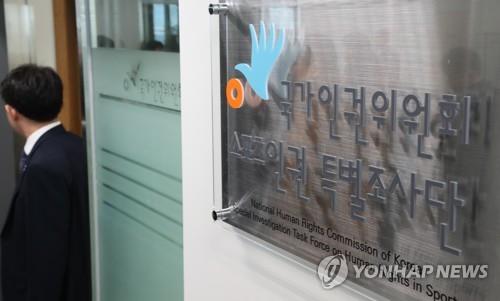 The commission noted 16.7 percent of all respondents said they were forced to attend group dining events against their will, while another 16.2 percent said they suffered from backbiting or gossiping.

The poll also found 13.4 percent victimized by verbal abuse and intimidating words and deeds and 13.1 percent by forced drinking or smoking.

Most respondents said they suffered workplace harassment two to three times, while about 10 percent of them cited more than 10 times, indicating harassment is habitual and repetitive.

The survey showed sexual harassment is also serious at the local sports organizations, as about 10 percent complained about being sexually harassed or assaulted at workplaces.

The ratio of sexual harassment was higher at 21.1 percent among female respondents compared with 2.9 percent for men, it said, adding that most of the victims were psychologically traumatized later.

But only 10.2 percent of the victims of sexual harassment reported it to the authorities for the reasons of wanting to avoid being talked about at work or expecting little difference after, the survey showed.

"The latest survey indicates that the organizational culture of sports organizations is still authoritarian and male-oriented. Many respondents demanded greater efforts to boost human rights awareness among sports organization managers and executives," an official involved in the poll said.

One in three employees at sports organs suffer harassment at work: poll

One in three employees at sports organs suffer harassment at work: poll