SEOUL, March 9 (Yonhap) -- South Korea will provide US$3 million to the World Health Organization (WHO) to help global efforts to fight the new coronavirus, the foreign ministry said Monday,

Foreign Minister Kang Kyung-wha made the pledge during phone talks with WHO Director General Tedros Adhanom Ghebreyesus late Sunday, the ministry said in a text message to reporters, as COVID-19 cases have topped 109,000 with more than 3,700 deaths worldwide.

During the phone talks, Kang also explained to the WHO chief Seoul's transparent and active quarantine efforts to contain the disease. Tedros, in response, thanked Kang for Seoul's pledge and said he was very well aware of the South Korean government's response measures against the virus.

In a Twitter post Sunday, Tedros said Korea was "making progress" in its fight against the virus, expressing appreciation for "Seoul's interventions to contain the coronavirus and save lives."

South Korea has reported 7,382 confirmed cases with 51 deaths linked to the novel virus, since the country reported the first case on Jan. 20. But the pace of new infections has slowed after massive testings on members of a religious sect at the center of the rapid spreading were completed, while health authorities still remain on high alert over new clusters of infections. 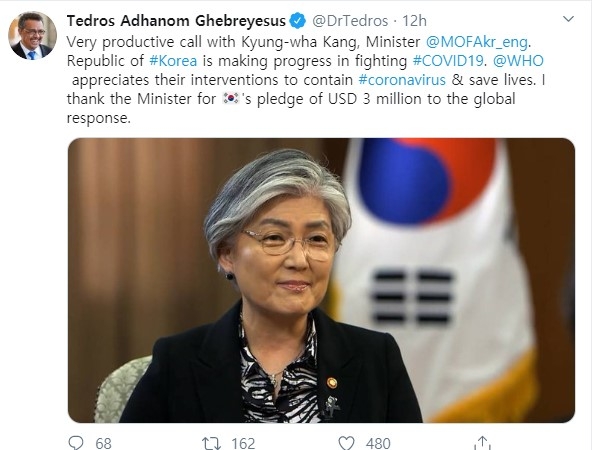 S. Korea to provide US$3 mln to WHO for fight against coronavirus

S. Korea to provide US$3 mln to WHO for fight against coronavirus