The celebrity, disgraced by illegal gambling and other misconduct charges, entered an Army recruit training center in Cherwon, a border town about 90 kilometers northeast of Seoul in Gangwon Province.

Seungri, a 30-year-old whose real name is Lee Seung-hyun, arrived at the training center at around 1:30 p.m. and underwent a temperature check as part of the military's efforts to curb the coronavirus outbreak before entering the military facility.

He bowed toward reporters but remained silent, though he was asked how he feels. 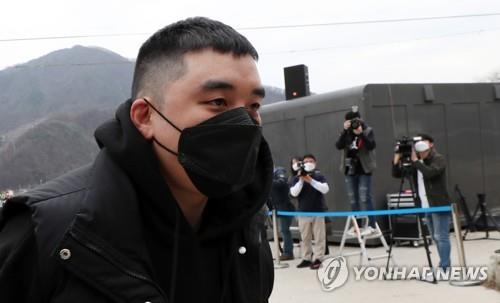 All able-bodied South Korean men must carry out military service for about two years in a country that faces North Korea across a heavily fortified border.

The enlistment came after prosecutors indicted him without detention in late January on charges of gambling overseas, arranging prostitution and breaching the foreign exchange transaction law.

He is accused of habitually gambling in Las Vegas from 2013 to 2015, breaching the foreign exchange transaction act to secure gambling funds and arranging sex services for foreign acquaintances in 2015.

Prosecutors requested a pretrial detention warrant for him last May and January, but a Seoul court rejected them each time.

Seungri ceased all entertainment activities in March last year after Burning Sun, a nightclub he was affiliated with, was investigated on allegations of drug use and sexual abuse.

Following the conscription, his case will be transferred to the military court.