Making his second spring start, the left-hander pitched three shutout innings against the Minnesota Twins at CenturyLink Sports Complex in Fort Myers, Florida, on Monday (local time). He extended his scoreless streak in the Grapefruit League to eight frames across four outings -- two in starts and two in relief.

Kim struck out four and pitched around two singles Monday, and now has 11 Ks against one walk and five hits -- all singles -- in eight spring innings.

Kim left the game with the Cardinals up 2-0. They went on to win 3-0, and Kim was credited with his first win of spring training.

An MVP-winning starter in South Korea, Kim is battling for a rotation spot with the Cardinals in his first big league camp. And he seems to be moving closer to one with each passing outing. 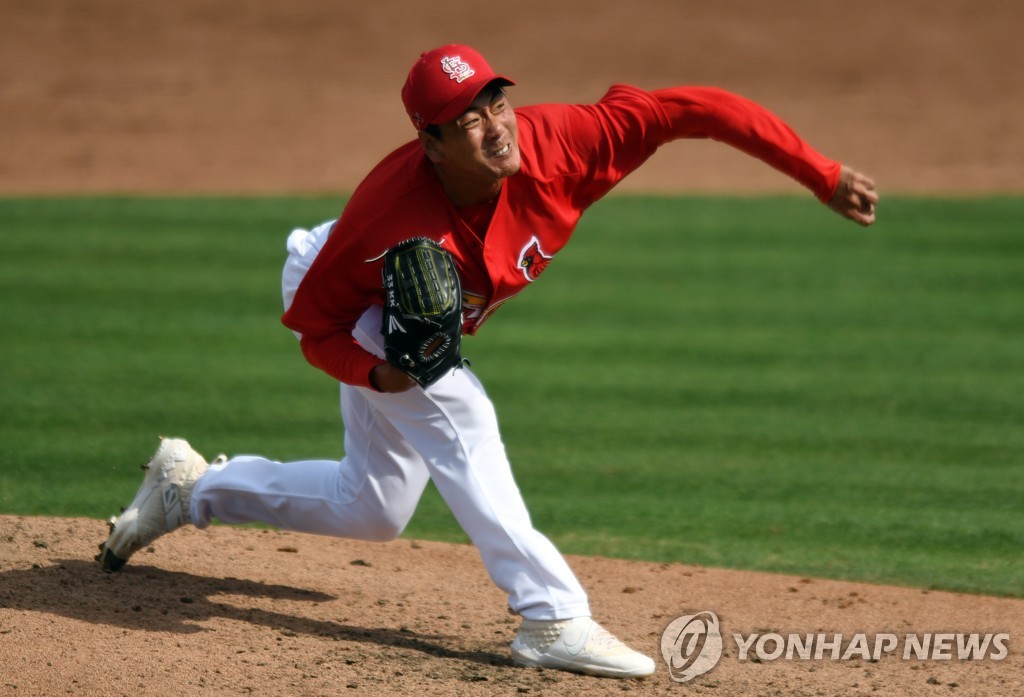 He threw 46 pitches in this one, with 31 of them going for strikes.

Kim took on perhaps the most lethal lineup he'd faced all spring, with five 30-homer sluggers from last year. One of them, leadoff man Max Kepler, struck out looking at a fastball to begin the bottom first. Then Josh Donaldson, he of 37 dingers with the Atlanta Braves in 2019, fanned on a high fastball for Kim's second consecutive strikeout.

Kim got Jorge Polanco to ground out back to the mound for an easy, 1-2-3 inning.

Kim cruised along in the second inning. He struck out the ever-dangerous Nelson Cruz, coming off a 41-home run season, with a slider. Eddie Rosario flied out to right after a seven-pitch battle, and Miguel Sano grounded out to shortstop for another three-up, three-down inning for Kim.

After striking out Marwin Gonzalez to open the bottom third, Kim got into trouble by giving up consecutive singles to Alex Avila and Gilberto Celestino.

But the left-hander kept the Twins off the board by retiring Kepler on a flyout and Donaldson on a fielder's choice groundout.

Kim was scratched from a scheduled start on March 2 because of mild groin soreness. He was then supposed to start last Thursday, only to be shuffled to the bullpen on the eve of the game. Amid these changes, the 31-year-old hasn't missed a beat.

"He's a good, strong competitor," manager Mike Shildt said. "He looks like he's going to be able to handle himself, regardless of the situation."

Three returning starters for the Cardinals, Jack Flaherty, Adam Wainwright and Dakota Hudson, are locked into the rotation. At the start of camp, there was only one available spot, but an elbow injury to an incumbent Miles Mikolas opened up another.

A handful of pitchers are in the running. Kim is jostling with Carlos Martinez, a two-time All-Star as a starter who's eyeing a return to the rotation after serving as the closer in 2019. Austin Gomber, John Gant and Genesis Cabrera have also received spring starts.