The net asset value of money market funds (MMFs) stood at 143.6 trillion won (US$119 billion) as of end-February, up 15.2 trillion won from a month earlier and the highest end-of-month tally, according to the data from the Korea Financial Investment Association.

The amount has been on the rise this month amid escalating concerns over the global spread of the flu-like virus, reaching an all-time high of 147.8 trillion won as of Thursday.

MMFs usually invest in short-term debt securities, such as Treasury bills and commercial paper. They are considered as safe as bank deposits but with a higher return. 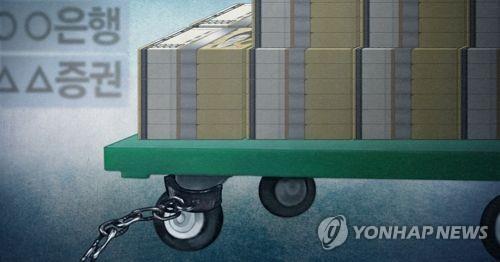 Market watchers attributed the surge to growing fears that COVID-19 could become a pandemic, which has sent global stock markets into a tailspin.

Also responsible are a prolonged period of low interest rates and tougher government restrictions on the housing market, which has prompted more investors to put their money into MMFs, they added.

The Bank of Korea cut its policy rate by a quarter percentage point to 1.25 percent in October amid concerns over a trade war between the United States and China.
(END)