On Monday, the main index fell below the psychologically important 2,000-point level by dipping more than 4 percent, as investors braced for continuing virus angst and a plunge in global oil prices.

Tuesday's weak start followed heavy losses in the U.S. market over fears about the impact of the coronavirus on the global economy. The Dow Jones industrial average sank 7.79 percent on Monday (local time), with the tech-heavy Nasdaq composite index plummeting 7.29 percent. 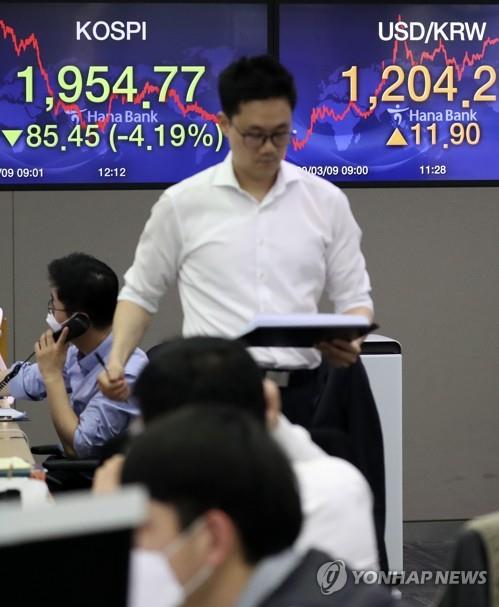 The COVID-19 outbreak has spread beyond China, where it originated in December, to South Korea, Japan, Iran, Europe and the United States, dampening both business and consumer sentiment as well as hitting related industries hard.

The virus has infected more than 109,000 people in more than 100 countries and regions, with 3,809 deaths, according to the World Health Organization.

In South Korea, the coronavirus has killed 54 people, mostly elderly patients with underlying illnesses, and infected more than 7,500 others.

Before the market opening, Finance Minister Hong Nam-ki said the government will temporarily ease its requirements for the designation of certain shares subject to a possible ban on short selling in a move to help stabilize markets. The measures will take effect on Wednesday.

The local currency was trading at 1,199.60 won against the U.S. dollar, down 4.60 won from the previous session's close.