SEOUL, March 10 (Yonhap) -- A quick glance at the starting lineup for the Minnesota Twins in a spring training game against the St. Louis Cardinals in Florida on Monday (local time) would have struck fear into most pitchers.

There was Max Kepler, who had 36 homers in 2019, leading off. He was followed by Josh Donaldson, the 2015 American League MVP who had 37 dingers with the Atlanta Braves a year ago. Batting cleanup was Nelson Cruz, who led the Twins last year with 41 homers. Eddie Rosario (32 homers) and Miguel Sano (34) were hitting fifth and sixth.

But the Cardinals' South Korean starter Kim Kwang-hyun couldn't care less about those slugging numbers. It's not that he doesn't respect those hitters; Kim just prefers to keep the focus on himself. 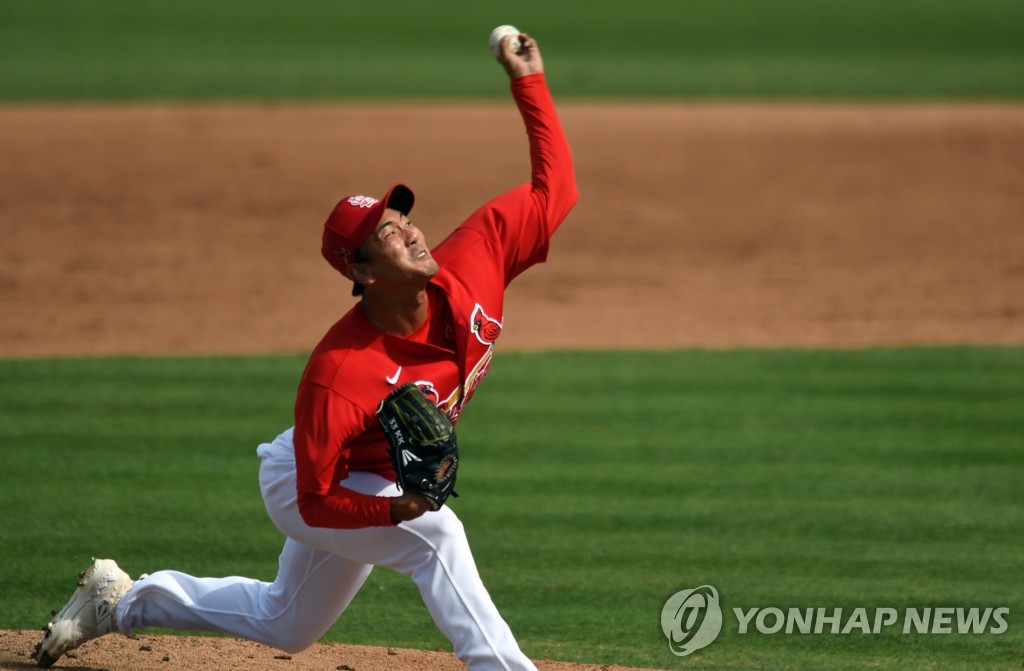 And that approach worked. Kim tossed three shutout innings, striking out four and giving up just two singles in the Cardinals' tidy 3-0 win at CenturyLink Sports Complex in Fort Myers.

"Whether it's the regular major league hitters or reserves in the opposing lineup, it doesn't really matter to me," Kim told Korean reporters afterward. "What I do on the mound and how I feel out there is more important."

Kim has yet to give up a run in eight innings across four appearances -- two in starts and two in relief -- this spring. Kim has been particularly effective in changing speeds with his slider, and he's been throwing the curveball more, after building a reputation as a fastball-slider hurler over 13 years in South Korea.

Some of his fastballs in this one had some cutting action, and Kim said it wasn't necessarily by design.

"In Korea, I threw mostly straightaway fastballs and they would get barreled a lot," Kim said. "But today, those pitches cut quite a bit and I got a lot of soft contact. It's become a good weapon for me."

Kim is battling for a rotation spot at the start of the regular season and remains on a starter's schedule. He said his next appearance should come on Saturday.

He had a hectic week last week, when he had a scheduled start scratched because of mild groin soreness and then shuffled to the bullpen the day before his rescheduled start. That bullpen appearance came last Thursday, and Kim was pitching on three days' rest against the Twins.

"I also had a bullpen session in between, and so I was a bit fatigued today," Kim said. "Considering the circumstances, my performance wasn't that bad."

Cardinals' Kim Kwang-hyun keeps focus on self, not sluggers at plate

Cardinals' Kim Kwang-hyun keeps focus on self, not sluggers at plate