SEOUL, March 10 (Yonhap) -- In his second spring training start as a Toronto Blue Jay in Florida on Monday (local time), left-hander Ryu Hyun-jin held the Tampa Bay Rays scoreless over 4 1/3 innings. He struck out four and didn't walk anybody.

In other words, it was just another day at the office for the 32-year-old Korean hurler.

"I had good control with all my pitches, and I didn't issue any walks," Ryu told Korean media at TD Ballpark in Dunedin, Florida. "Though I gave up an extra-base hit (a Willy Adames double in the second), I think things are going really well as far as building up my pitch count and innings."

Ryu threw 44 of his 66 pitches for strikes. And because he doesn't light up the radar gun and overpower hitters, Ryu has to rely on his command and pitch sequence to keep hitters off balance. 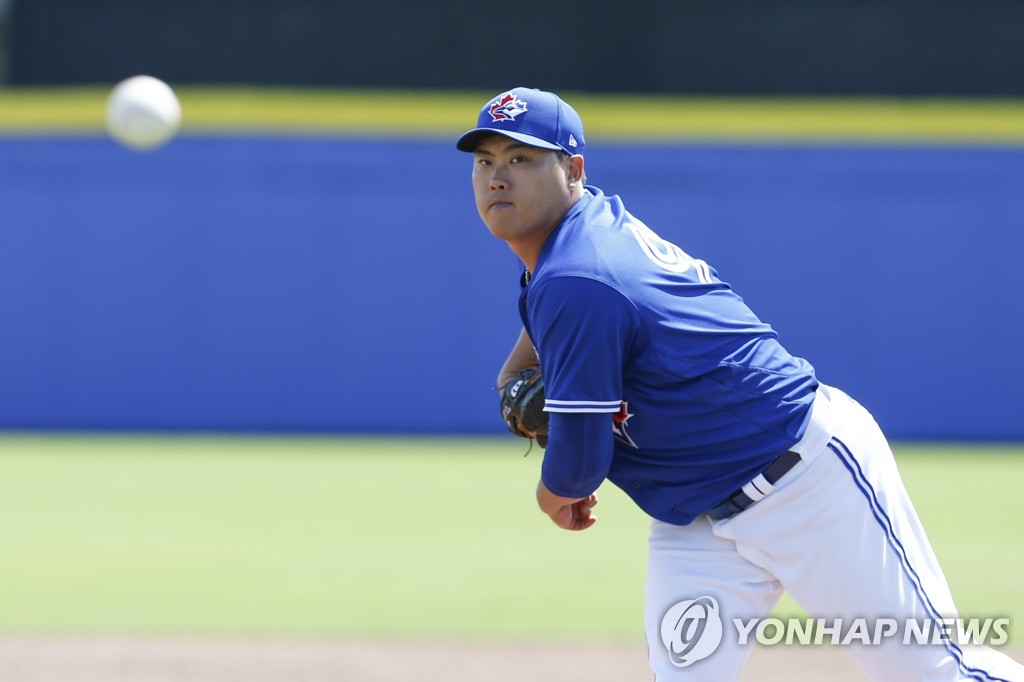 And Monday's outing was vintage Ryu, who led the majors with a 2.32 ERA last year while pitching for the Los Angeles Dodgers. He induced five groundouts and got a couple of infield pop flies, and survived four 3-2, full-count battles, getting two strikeouts, one groundout and one flyout from those situations.

Ryu said if he had to nitpick himself, he could have located his fastballs a little better.

"I have a couple of starts remaining (in spring training), and I need to improve my fastball command," said Ryu, who will most likely get the Opening Day assignment against the Boston Red Sox on March 26 in Toronto.

Ryu threw 54 pitches through four innings, just short of his targeted range of 65 to 70. So he came back out for the fifth and needed 10 pitches to retire Michael Perez on a grounder to first.

He was lifted to a rousing standing ovation from the Jays' faithfuls at TD Ballpark, and Ryu said he could get used to such receptions.

"It always feels great to receive a standing O," Ryu said with a smile. "I'll try to get more of them during the regular season."