SEOUL, March 10 (Yonhap) -- One Air Force officer stationed in the southeastern city of Daegu tested positive for the new coronavirus, bringing the total number of confirmed cases in the military to 37 on Tuesday, the defense ministry said.

Of the total, 20 were in the Army, 13 in the Air Force, two in the Marine Corps and one each in the Navy and a unit under the direct control of the ministry, according to the ministry.

Thirty-two COVID-19 patients are active-duty service members and the remaining five are civilians working for the military, it added.

As a preventive step, around 2,560 service members are quarantined at their bases. Of them, around 280 have either shown symptoms or had direct contact with infected patients, while the remainder recently visited Daegu, North Gyeongsang Province or virus-hit foreign nations, including China.

To stem the further spread of the virus, the Air Force is thinking about postponing an upcoming domestic shooting competition for about a month, according to officers.

The biannual event is currently scheduled to kick off later this month and run until May in coastal areas of the western city of Boryeong, 140 kilometers south of Seoul, bringing together all Air Force units that operate short-range anti-aircraft weapons such as Vulcan guns.

As of Tuesday, South Korea had 7,513 confirmed cases of the novel coronavirus, including 54 deaths. More than 90 percent of the total cases, or 6,780 patients, occurred in Daegu and North Gyeongsang, according to the Korea Centers for Disease Control and Prevention (KCDC).

All off-installation drills were halted across the country late last month. But the ministry decided to partially resume outdoor drills by active-duty soldiers Tuesday in order to maintain a readiness posture, as long as the maneuvers are held without contact with civilians.

"Commanding officers in each unit can make a decision in accordance with their unique circumstances, and all training will accompany thorough quarantine measures," a ministry official said.

The military has also extended continued support for governmentwide anti-virus efforts. Currently, about 2,640 soldiers and ministry officials, including over 100 military doctors, are assigned to major checkpoints and health facilities across the country for quarantine and treatment efforts, according to the ministry.

Vice Defense Minister Park Jae-min on Tuesday visited the Armed Forces Medical Command in charge of managing military medical staff, as well as the Korean Armed Forces Capital Hospital both located in Bundang, just south of Seoul, and expressed gratitude for the commitment of personnel, the ministry said. 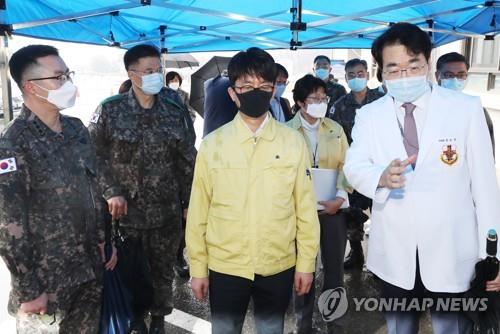