SEOUL, March 10 (Yonhap) -- Four Japanese nationals without an entry visa for South Korea were not allowed to board an airplane bound for Seoul on Monday, the first day of the two countries' entry restrictions on each other's citizens, the Ministry of Justice said Tuesday. 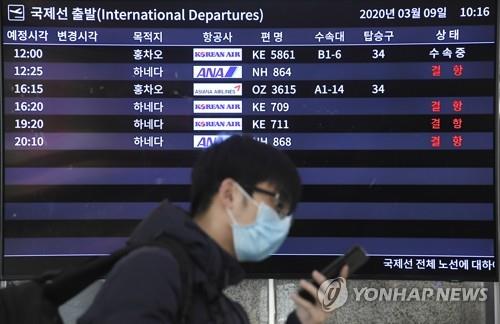 The ministry said the four Japanese citizens were prevented from boarding flights for South Korea after their visa status was screened by the Incoming Passenger Card (IPC) system. IPC is a system that helps immigration authorities check the entry eligibility of international passengers.

On the same day, a total of five Japanese nationals entered South Korea via flights originating from Japan, the ministry noted. All of them were not subject to the entry restrictions, as they have been staying in South Korea for a long time with professional employment and special activity visas, it explained.

South Korea has so far reported over 7,500 COVID-19 infections, while Japan has logged more than 500 patients.