SEOUL, March 11 (Yonhap) -- South Korea's jobless rate fell in February and job creations rose by more than 400,000 for the third straight month, with the outbreak of the new coronavirus dealing a harsh blow to some sectors, such as the retail and wholesale segment, data showed Wednesday.

The unemployment rate fell 0.6 percentage point to 4.1 percent last month, and the number of employed people reached 26.83 million, according to the data compiled by Statistics Korea. South Korea added 492,000 jobs in the month.

The unemployment rate for young adults -- those aged between 15 and 29 -- decreased to 9 percent last month from 9.5 percent tallied a year earlier. 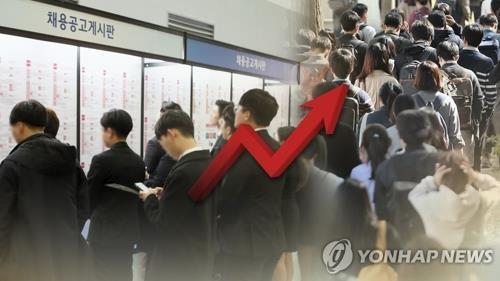 The employment rate for people aged between 15 and 64 rose to 66.3 percent last month, marking the highest-ever for February since 1982.

By industry, the health and social welfare sector added 202,000 jobs, and the transportation segment saw an increase of 99,000 jobs last month amid rising demand for delivery services in the wake of the novel coronavirus outbreak.

The COVID-19 outbreak, however, shed jobs in other areas as citizens avoided going out.

The wholesale and retail sector suffered a decline in job offerings by losing 106,000 jobs in February. The information and telecommunication sector also shed 25,000 jobs.

The jobs data came amid hopes that South Korea's economy could regain its recovery momentum this year, but the fallout from the new coronavirus is dashing such hope.

The total number of COVID-19 infections here, meanwhile, were above 7,500 as of Tuesday.