(ATTN: ADDS ambassador's comment and other details in paras 3-5)
By Kim Seung-yeon

SEOUL, March 11 (Yonhap) -- U.S. Ambassador Harry Harris visited Incheon International Airport on Wednesday to see how fever checks on U.S.-bound passengers are going, praising the process as "the exemplar around the world."

Harris visited a boarding gate in the Second Terminal of the airport, west of Seoul, and observed officials taking the temperatures of passengers of an Atlanta-bound Korean Air plane and received a briefing about the screening process.

"I appreciate the hard work that (airport staff are) doing for all of us, really, not just Americans, but everyone, as Korea works to limit the spread of COVID worldwide," he was quoted as saying by the U.S. Embassy in Seoul.

"The Korean model is held up as the exemplar around the world," he said.

The ambassador said in a Twitter post later, "Terrific visit to Incheon Airport to see 1st-hand ROKG measures to combat COVID-19 & mgmt of travelers to USA. Impressed w/ROK's robust & comprehensive response efforts to limit the virus' spread. Thanks to all for the hard work."

The embassy said it remains "confident in the South Korean government's robust and comprehensive response efforts to limit the spread of COVID-19."

"We maintain close contact with partners at the KCDC, USFK and relevant U.S. Government agencies. Such strong international cooperation is what will defeat this disease," it said. KCDC refers to the Korea Centers for Disease Control and Prevention.

On Tuesday, the government said it will take over the anti-coronavirus screening mission from airlines and conduct health examinations on passengers boarding flights to the U.S. from the Incheon airport and Gimhae International Airport in the southeastern city of Busan.

The U.S. government has been urging its citizens to reconsider travel to Korea under an elevated travel advisory due to the virus fears, with its health authorities recommending that Americans avoid all nonessential travel here.

Seoul officials have said that the stepped-up quarantine efforts are aimed at preventing any possible outflow of the virus from Korea.

The government said earlier three quarantine facilities will be set up in Incheon and one in Gimhae, and more than 40 quarantine officials to be dispatched to the airports.

Passengers were to undergo fever checks and fill out health questionnaires. If they have a fever of 37.5 C or higher, they will be sent home. They will be quarantined immediately if they test positive for the virus. 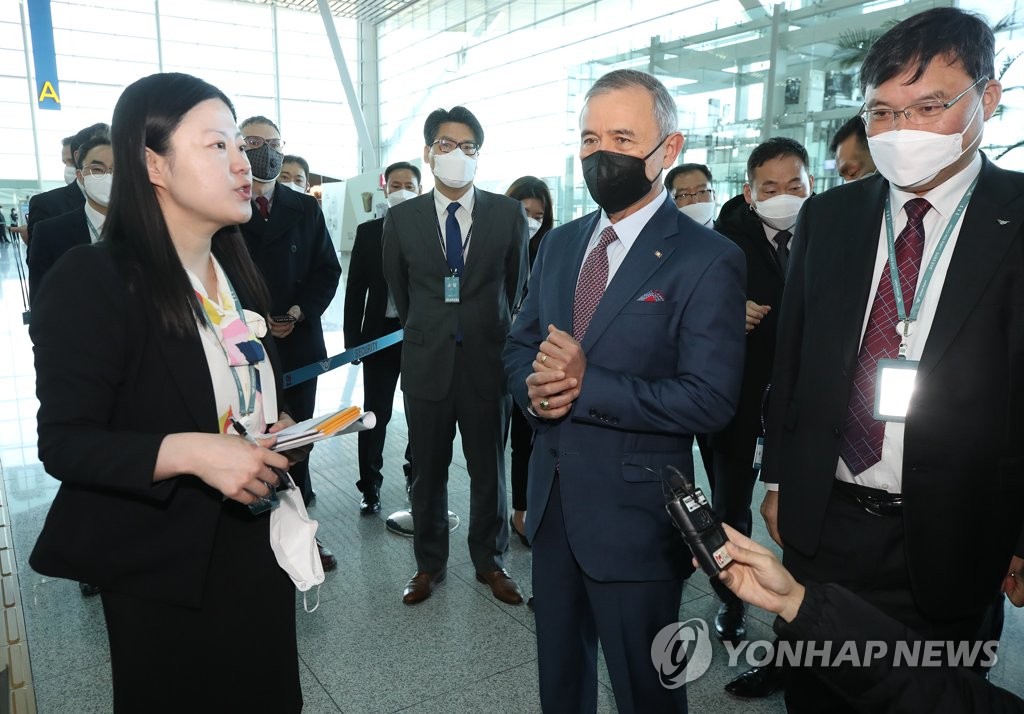