SEOUL, March 11 (Yonhap) -- The rise in household debt extended by banks in South Korea sharply accelerated from a month earlier in February mainly due to a one-off factor, central bank data showed Wednesday.

Fresh bank loans to households came to 9.3 trillion won (US$7.82 billion) in the month, compared with a 2.5 trillion won increase the same month last year, according to the data from the Bank of Korea (BOK).

The amount also marks a sharp increase from a 3.7 trillion-won gain in January.

Such an increase comes despite new government regulations, enforced since December, to further limit home-backed loans as part of efforts to curb real estate speculation. 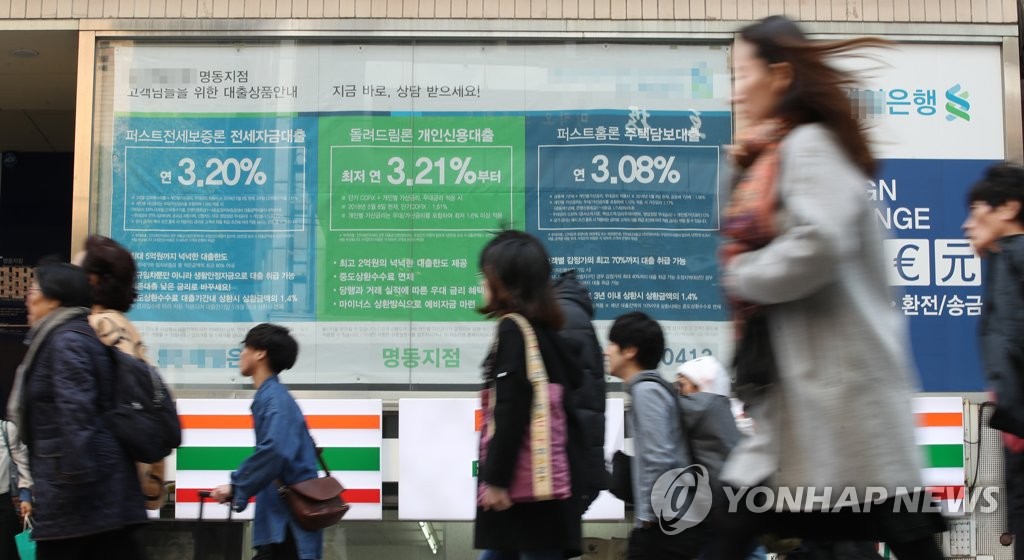 "Home transaction deals and rentals normally work as an upward factor for loans two to three months after they are signed," it said in a press release, noting the number of apartment transactions in Seoul had peaked at 12,000 in October and 11,000 the following month before slipping to around 6,000 in January.

Other household loans gained 1.5 trillion won, marking a turnaround from a 600 billion-won drop in January.

Outstanding bank loans to households came to 901.3 trillion won as of end-February.

Corporate loans also continued to grow in February but at a much slower pace than a month before.

Outstanding loans extended by banks to local companies came to 882.6 trillion won as of end-February, up 5.1 trillion won from a month earlier that marks a sharp slowdown from a 8.6 trillion-won increase in January.

Bank deposits gained 35.9 trillion won in February, marking a sharp turnaround from a 15.1 trillion-won drop the month before.