The South Korean tech giant took a 9.2 percent share in the global wearables market in 2019, up 2.3 percentage points from a year earlier, IDC said.

China's Xiaomi Corp. was the runner-up with 41.7 million units of wearable shipments, although its market share declined to 12.4 percent from 13.1 percent a year earlier, IDC data showed. 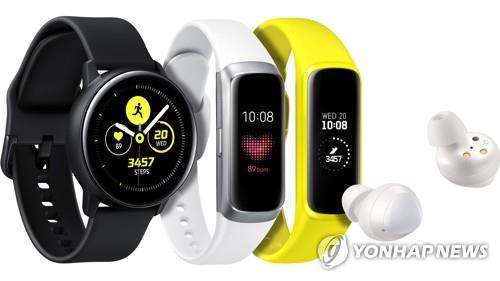 "The market for wearables is also quickly becoming very top heavy as companies such as Apple and Samsung capture a greater share of the market," Jitesh Ubrani, research manager for IDC Mobile Device Trackers, said. "While these giants put pressure on the rest of the market, there continues to be plenty of innovation and differentiation amongst the smaller brands, and this long tail of the market will carry on for the foreseeable future."

IDC said "hearables," which refer to wearable devices that hang on or are placed into the ear, led the sharp growth of the industry.

Shipments of hearable products, including earphones and headphones, reached 170.5 million units last year, spiking 250.5 percent from the 48.6 million units shipped in 2018. They accounted for more than half of the total wearable product shipments in 2019.

Smart watches came in second after 92.4 million units were shipped last year, up 22.7 percent from a year ago. Wristbands finished third with 69.4 million units of shipments.

Samsung No. 3 vendor of wearable devices in 2019: report

Samsung No. 3 vendor of wearable devices in 2019: report