SEOUL, March 11 (Yonhap) -- One Army soldier stationed in Seoul tested positive for the new coronavirus, bringing the total number of confirmed cases in the military to 38 on Wednesday, the defense ministry said.

Of the total, 21 were in the Army, 13 in the Air Force, two in the Marine Corps and one each in the Navy and a unit under the direct control of the ministry, according to the ministry.

To stem the further spread of the virus, the Republic of Korea Navy Academy, located in the southeastern city of Changwon, is to hold a scaled-back commencement and commissioning ceremony later in the day without inviting the new officers' parents or other family members.

Instead, the ceremonies will be broadcast live via social network service platforms of the schools, according to the Navy. 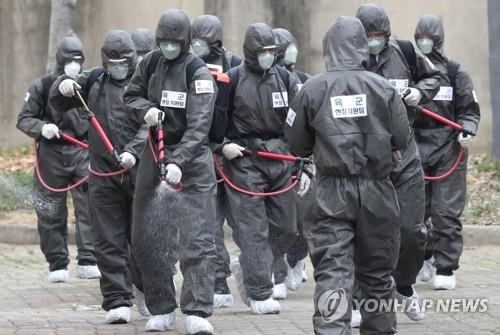 One more soldier tests positive for coronavirus, total at 38

One more soldier tests positive for coronavirus, total at 38