SEOUL, March 11 (Yonhap) -- South Korea said on Wednesday that it will apply strict quarantine screening to entrants from COVID-19-hit Italy and Iran in addition to those arriving from mainland China, Hong Kong and Macao.

Starting from midnight, passengers from the two countries grappling with spiking outbreaks of the novel coronavirus will be required to write a special quarantine report, answering questions about whether they have a fever or respiratory problems.

Since February, South Korea has been adopting enhanced quarantine measures against arrivals from China, Hong Kong and Macao as part of efforts to stem the inflow of the virus. 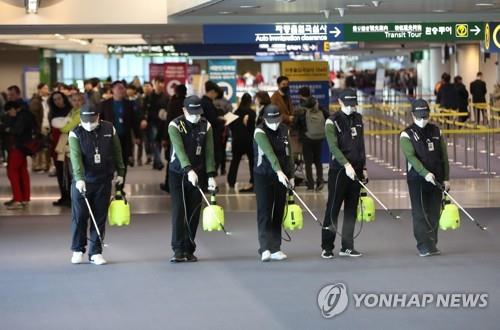 The enhanced quarantine measures came as Italy and Iran saw virus infections soar in recent few days. The two countries are only second and third to China, the epicenter of the virus outbreak, in reported cases.

Italy has reported more than 10,000 confirmed virus cases as of Wednesday with 631 deaths.

Iran is also struggling to contain further spread of COVID-19 -- its confirmed cases have exceeded 8,000 and its death toll is over 290.

Since its first case in late January, South Korea has reported a total of 7,755 infections, according to the Korea Centers for Disease Control and Prevention (KCDC).

So far, 60 people, mostly elderly patients with underlying illnesses, have died here from the respiratory virus.