In December, the HDC-Mirae Asset Daewoo consortium signed a deal to acquire a 30.77 percent Asiana stake from Kumho Industrial Co., a construction unit of Kumho Asiana Group, as well as new shares to be issued and the airline's six affiliates, for 2.5 trillion won (US$2.2 billion).

"There have been growing concerns that HDC's plan to take over Asiana might face difficulties due to the new coronavirus outbreak. But the acquisition plan remains intact," the company said in a statement. 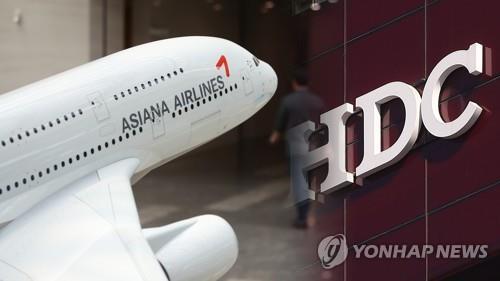 HDC also stressed that its funding for the Asiana takeover is going smoothly.

HDC recently raised 321 billion won by selling stocks and plans to sell 300 billion won worth of bonds and take loans from local lenders to fund the acquisition of the country's second-biggest airline after Korean Air Lines Co.

The company plans to invest 2.18 trillion won in new shares to be issued by Asiana Airlines to help improve the airline's financial status. It said it plans to cut costs by streamlining routes and enhancing cost effectiveness.