The seven-member committee said it sent a letter of suggestion to Lee -- Samsung Electronics vice chairman and the de-facto leader of Samsung Group -- and seven affiliates of South Korea's top conglomerate, and asked them to come up with measures that can improve their compliance culture in three areas: managerial succession, labor union and communication with civil society.

The committee, led by former Supreme Court Justice Kim Ji-hyung, asked Lee to issue a public apology over the succession of managerial rights to him from his ailing father, Lee Kun-hee. The succession process has involved a bribery case and a controversial merger of two Samsung affiliates. 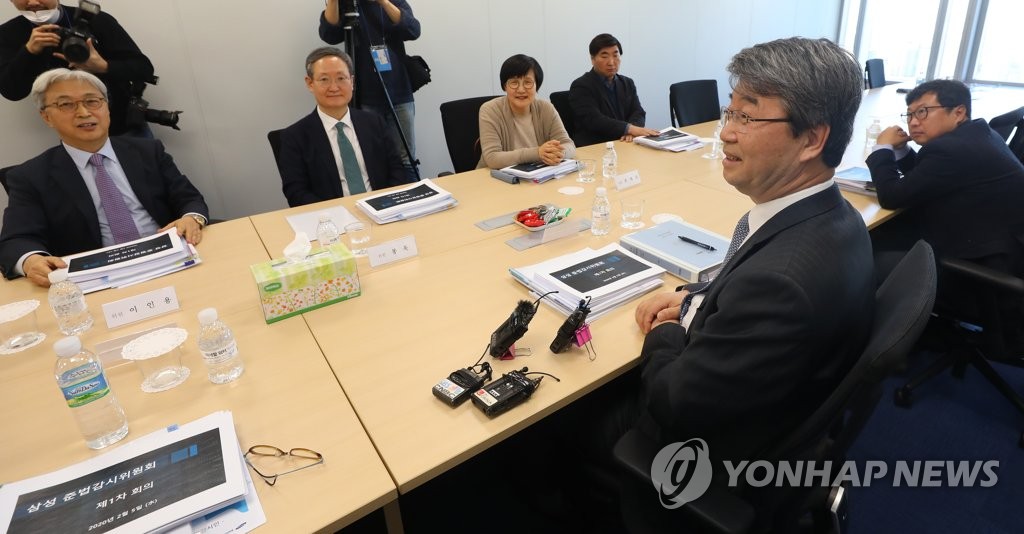 Lee was indicted in 2017 for giving bribes to a longtime friend of then-President Park Geun-hye as he sought backing for his plan to secure the throne of South Korea's biggest conglomerate.

The committee also told Lee to announce that Samsung will ditch its "no labor union" policy and prepare measures that can build a healthy labor-management relationship.

In 2012, Samsung said it recognizes the representative of employees as a management partner.

Samsung Group is South Korea's largest conglomerate, with 61 affiliates, whose business portfolio ranges from electronics and construction to life insurance and fashion and a theme park.

In regard to communication with civil society, the committee recommended that Lee announce measures that can build social trust.

The committee, which was launched in January, also advised Lee and Samsung affiliates to come up with measures that guarantee the committee's independence and compliance monitoring activities.

"These recommendations are the result of our committee's commitment to a watchdog role for Samsung's ethical and law-abiding management," it said. "We hope our recommendations can signal the start of a new history of Samsung to our society."

Samsung said it will faithfully review the recommendations. Samsung has 30 days to respond to the committee.