Moon visited the Korea Centers for Disease Control and Prevention (KCDC) in Cheongju, 140 kilometers south of Seoul, for the first time since the nation reported the outbreak of COVID-19 on Jan. 20.

"The COVID-19 has left scars on citizens' hearts and sapped their pride, and due to the spread of the infection, anxiety, fear and a sense of helplessness have deepened," Moon was quoted as saying at the KCDC.

"But the KCDC has detected and tested those with symptoms at the fastest pace in the world, and lowered the fatality rate with appropriate treatment when infections were confirmed. The international community is taking note of this and this is a healing for our citizens," he added. 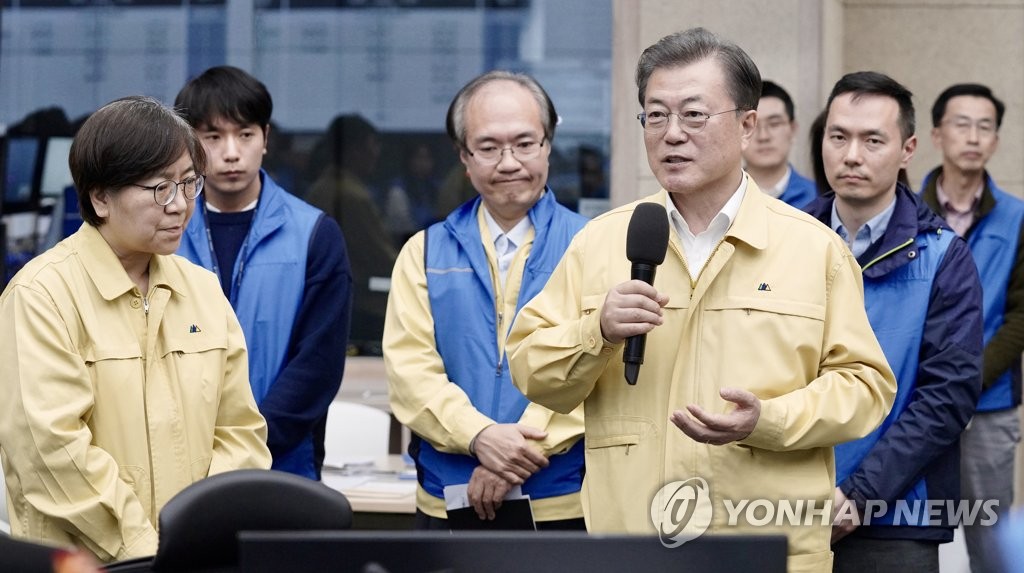 The president also said that South Korea has been able to do without the "extreme choice" of entry bans on visitors from virus-hit countries, thanks to such measures as special entry procedures that involve fever checks and other health examinations at airports.

"We can more confidently talk about the outcomes the KCDC has yielded," he said.

Earlier in the day, the KCDC reported an uptick in new daily COVID-19 cases, as the nation was grappling with new mass infections in Seoul and neighboring areas. The country's virus caseload reached 7,755 with the death toll standing at 60.

The pace of daily new infections had shown signs of slowing in recent days as health authorities have completed testing of 210,000 followers of the Shincheonji religious sect. A branch of its churches in the southeastern city of Daegu is the center of the rapid spread here.