SEOUL, March 12 (Yonhap) -- Sales of Lotto tickets in South Korea hit an all-time high in 2019 on their increased availability amid an economic slowdown, data showed Thursday.

Total Lotto sales were tallied at 4.3 trillion won (US$3.6 billion) last year, up 8.8 percent from the prior year, according to the data from the finance ministry and the Korea Lottery Commission.

The growth rate was up from a 4.4 percent increase in 2018 and a 6.5 percent gain in 2017. It also marks the first time that yearly sales of Lotto, the most popular offline lottery ticket in the country, have topped the 4 trillion-won mark.

The ministry attributed last year's rise to an increase in the number of sales outlets and the start of online selling. Analysts also said the country's sluggish economy was responsible. 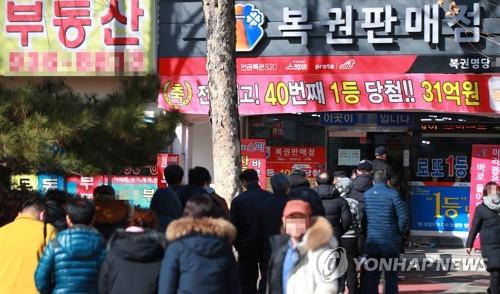 Last year, the number of Lotto sales outlets increased by 324 to 6,839 across the nation. South Korea's economy grew 2 percent on-year, the slowest gain since a 0.8 percent gain in 2009.

Sales of Lotto, which made its debut in 2002, soared to 3.82 trillion won in 2003, when a buying frenzy gripped the nation after a winner took a record prize of 40.7 billion won in April that included money carried over from previous drawings.

Sales plunged 13.7 percent to 3.29 trillion won in 2004 as the government restricted the carryover of prize money to one time only and halved the price of each game to 1,000 won.

According to a ministry survey, about 62 percent of the respondents said they had bought Lotto tickets at least once.
(END)