A new COVID-19 case was reported from the Ministry of Oceans and Fisheries based in the main government building in the administrative city of Sejong, 130 kilometers south of Seoul.

The Ministry of Patriots and Veterans Affairs also reported its first case from its workers on Wednesday.

A day earlier, South Korea confirmed four cases from the oceans ministry and another from the education ministry. 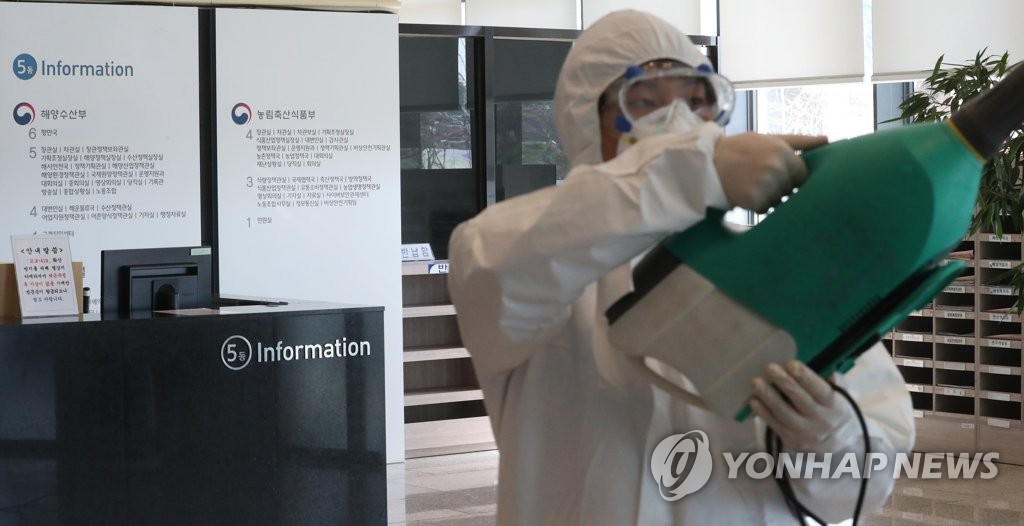 As the Sejong government complex accommodates 35 government ministries and agencies employing 15,000 workers, the latest cases have sparked concerns over a potential cluster infection.

Last week, the government complex reported its first case from a public servant working at the health ministry. Health officials said the patient is assumed to have contracted the virus at a Zumba class.

The second case from the complex was reported from the oceans ministry Tuesday. Of six cases from the ministry, five of them worked at the same department.

Two other public servants were infected in Sejong on top of the nine cases from the complex as well, but their workplaces were located in other buildings.

"We have ordered all staff members to work from home except for a few necessary workers," an official from the oceans ministry said.

South Korea has been struggling to cope with a possible cluster infection of the COVID-19, after nearly 100 cases of infection were found at a call center in southwestern Seoul.

The total confirmed number of infections had reached 7,755 in the country as of Wednesday.