SEOUL, March 13 (Yonhap) -- South Korean stocks trimmed earlier losses after tumbling to the lowest in more than eight years as financial authorities vowed to support the market jolted by the outbreak of the new coronavirus. The Korean won also dipped to a multi-year low against the U.S. dollar.

The benchmark Korea Composite Stock Price (KOSPI) Index trimmed earlier losses to surrender 43.75 points, or 2.39 percent, to 1,790.58 as of 2:40 p.m. The tech-heavy Kosdaq market also erased earlier losses to trade 4.9 percent lower at 535.77 points after falling by almost 13 percent at one time in the morning trade.

Trading in the main KOSPI and the secondary Kosdaq markets was briefly halted after they opened sharply lower. The KOSPI once dipped to as low as 1,680.60 points. 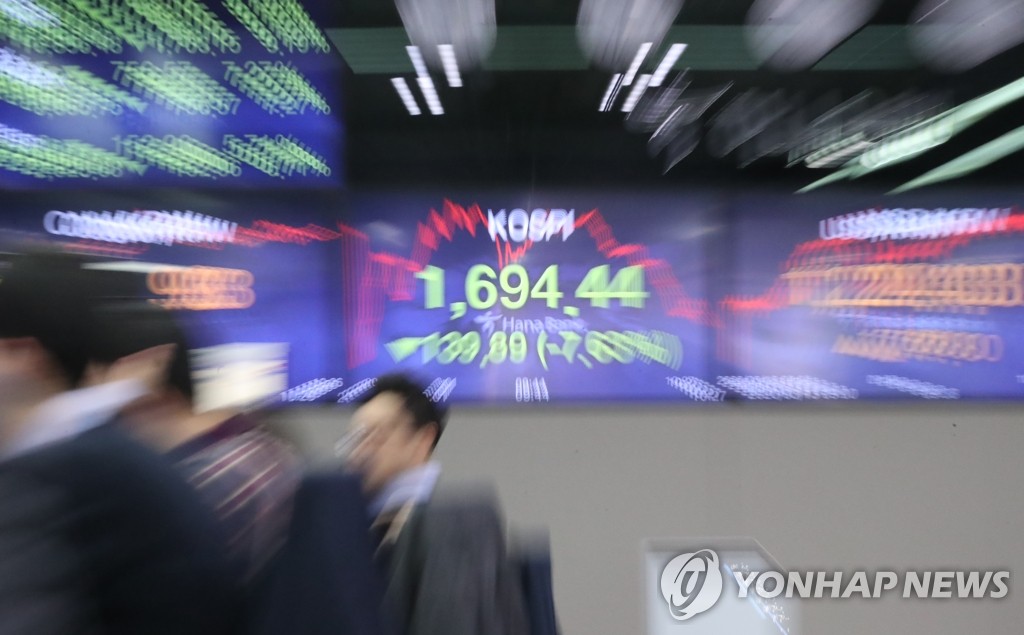 On Thursday (local time), U.S. House of Representatives Speaker Nancy Pelosi said lawmakers and the White House have neared an agreement on a stimulus package and hope to make an announcement on Friday. It is definitely giving a boost to investor sentiment, analysts said.

In an address to the nation Wednesday (local time), U.S. President Donald Trump made a shock announcement on banning travel from Europe, except for Britain, for 30 days, while not providing a detailed U.S. economic rescue package.

The country's financial authorities stepped in to curb sharp volatility in the financial markets, vowing to take necessary measures against one-sided moves.

The central bank said earlier in the day that it mulls an option to hold a meeting for a potential rate cut. The Ministry of Economy and Finance warned that it would intervene into the currency market to stem fluctuations.

"We are planning to actively use policy measures to stabilize the financial market as the volatility in the local financial and foreign exchange markets is expanding due to the impact from the spread of COVID-19," the central bank said after an emergency meeting.

The finance ministry said the government will carry out market-stabilizing measures if necessary. 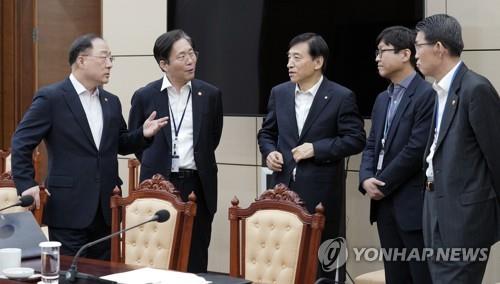 The KOSPI plunge came as investors assessed that the U.S. ban on travel from Europe and the planned coronavirus stimulus package won't be enough to counter the virus' impact on the economy.

The main index already plunged 6.6 percent in the past two sessions as investors dumped risky assets amid concerns that the spread of the coronavirus may end up in a much-dreaded recession.

Analysts said lack of clarity from the planned U.S. measures to cushion the economic pain of the novel coronavirus and its rapid spread across the globe look set to further add unease to the financial markets.

"Investors will remain cautious until the U.S. comes up with detailed relief measures to counter the virus' economic impact in the right time," NH Investment & Securities analyst Noh Dong-kil said.

Further weighing on investor sentiment is the World Health Organization's declaration of the coronavirus as a pandemic.

Most of large-cap stocks traded in the negative territory.