The DP's move is seen as a reversal of its stated protest against the formation of such a political organization often called a paper party.

In the April 15 elections, 253 lawmakers will be elected from first-past-the-post constituencies and 47 from proportional party lists.

In an effort to moderate public criticism, the DP has sought to participate in a coalition of reform-oriented parties, born for the purpose of gaining National Assembly seats based on proportional representation, instead of creating its own ad-hoc sister party.

Ruling party officials said they have no other practical choice but to push for the measure to counter what it calls the main opposition party's "trick" to exploit the zero-sum election system.

If the DP sits idle, the Future Korea Party, which is the UFP's sister party, is expected to snatch more than two dozen proportional representation seats, which would enable them to hold the National Assembly speaker post and chairmanship on a majority of standing committees as the No. 1 political force in the parliament.

The UFP says the ruling party should first offer a public apology for unilaterally revising the election law on the pretext of strengthening the proportional representation system. 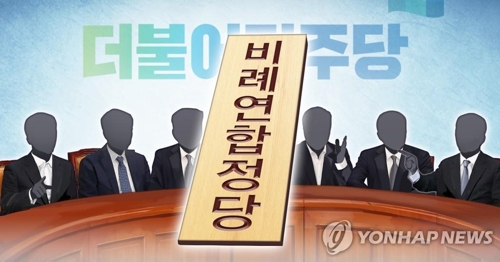