SEOUL, March 13 (Yonhap) -- South Korea saw another decline in its daily new infections Friday, as massive testings in the southeastern city of Daegu, the epicenter of the new coronavirus here, were nearing an end, but health authorities were ramping up measures to contain cluster infections across the nation.

The 110 new cases of the coronavirus, which were detected Thursday and marked the lowest number of daily infections in more than two weeks, brought the nation's total infections to 7,979.

A total of 177 patients were discharged from hospitals Thursday after they were declared cured, marking the biggest one-day increase so far and exceeding the number of daily new infections for the first time since Jan. 20, when the virus was first detected on South Korean soil.

Thursday's additional cases, which followed the 114 new cases detected Wednesday, were also far below the daily increases of 500 or more last week.

So far, 67 people, mostly elderly patients with underlying illnesses, have died in South Korea from the respiratory virus that emerged in China late last year, the Korea Centers for Disease Control and Prevention (KCDC) said.

The pace of daily new inflections has shown signs of slowing in recent days as health authorities completed extensive testing of 210,000 Shincheonji followers who are at the center of the rapid spread, but authorities are still on high alert over new clusters of infections, including at a call center in Seoul's Guro district and the country's government complex in the administrative city of Sejong.

Prime Minister Chung Sye-kyun said Friday the central government is taking steps to designate Daegu and North Gyeongsang as "special disaster zones," in a bid to offer medical and financial support to help the regions recover from the virus.

While Daegu and North Gyeongsang still account for the majority of daily new infections, cases of community spread with unknown origins, mostly cluster and sporadic outbreaks, are gradually on the rise.

Seoul's confirmed cases rose by 13 to 225, with at least 74 cases linked to a call center in Guro Ward and another 14 cases linked to Eunpyeong St. Mary's Hospital in Eunpyeong Ward. Another 13 cases in Seoul came from an apartment building in Seongdong Ward.

In South Chungcheong Province, which includes the city of Cheonan, 104 of the total 114 patients were tied to a Zumba dance class in Cheonan, the KCDC said.

Clusters of infections account for 79.8 percent of the total confirmed cases as of Friday, meaning that people can contract the virus if they are in crowded places. 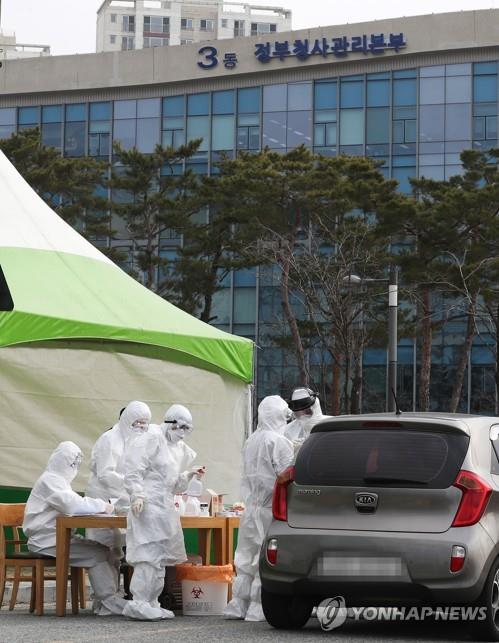 In the largest cluster of infections in Seoul so far, at least 109 people linked to a call center in southern Seoul had tested positive for the virus as of Tuesday, highlighting concerns about the virus' spread in a close environment and within the metropolitan area.

Raising an alarm bell on the spread of the virus at a sprawling government complex in the administrative capital of Sejong, 24 civil servants at the Ministry of the Ministry of Oceans and Fisheries, as well as two of their family members, were infected with the virus over the past three days. Like other cluster infections, authorities can't trace where the ministry's cluster started.

Yoon Tae-ho, a senior health ministry official who is in charge of quarantine work, told a media briefing that health authorities will require 3,612 followers of Shincheonji, who work at hospitals, kindergartens or nursing homes across nations, to get tests.

Yoon said the spread of the virus has showed signs of stabilization but warned against the "danger" of a growing number of imported virus cases.

Unlike other nations, which ban travel to virus-hit nations or put all people visiting such nations under mandatory two-week quarantine, South Korea has not implemented such stricter measures, except for foreigners who traveled to China's virus outbreak epicenter of Hubei province.

South Korea's health authorities have said such strict measures may be futile because the virus has already taken root in South Korea and community spread cases are growing.

South Korea has tested a total of 155 travelers who have suspected cases, but 154 tested negative for the virus and the remaining one person is awaiting test results, Yoon said. 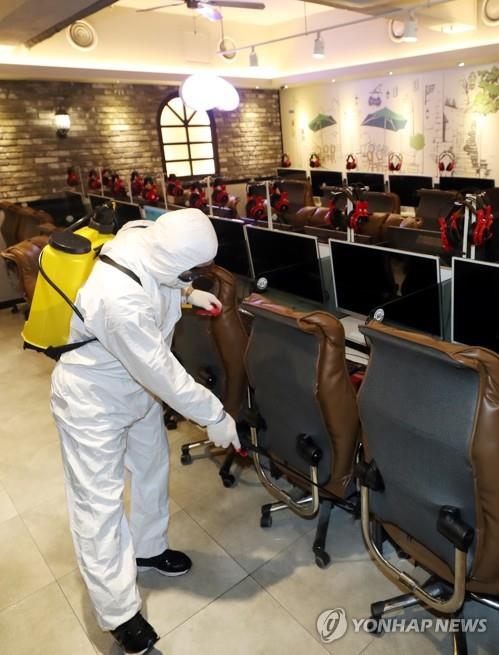 The World Health Organization declared Wednesday that the global coronavirus crisis is now a pandemic as the virus has spread to every continent except Antarctica.

South Korea had released a total of 510 fully recovered novel coronavirus patients from hospitals as of Thursday, up 177 from a day earlier, the KCDC said.

The number of people being checked for the virus and under quarantine came to 17,940 as of Thursday, down 213 from the day before, it said. The country has tested a total of 240,668 suspected cases, with 222,728 testing negative.