SEOUL, March 14 (Yonhap) -- South Korea's new coronavirus outbreaks continued to slow down Saturday, with more patients recovering from the novel coronavirus than new cases for the second day in a row, spawning cautious hopes that the virus outbreak in the country may be on a path toward containment.

The country reported 107 new cases of COVID-19, slightly down from 110 new cases a day earlier and 114 on Thursday, bringing the nation's total infections to 8,086, according to the Korea Centers for Disease Control and Prevention (KCDC).

With five new deaths reported Saturday, 72 people have died so far in South Korea from the respiratory virus since the first local coronavirus infection case here was confirmed on Jan. 20, the public health agency said.

The KCDC said 63 virus patients are in critical condition, it added.

South Korea, second to China in terms of virus infections in Asia, had released 714 fully recovered novel coronavirus patients from hospitals as of Friday, up 204 from a day earlier, the KCDC said.

The pace of daily new infections has shown signs of slowing in recent days as health authorities completed extensive testing of 210,000 Shincheonji followers who are at the center of the rapid spread.

But authorities are still on high alert over new clusters of infections, including at a call center in Seoul's Guro district and the country's government complex in the administrative city of Sejong.

Of the new cases, 62 are in Daegu and six are in North Gyeongsang Province, where Daegu is located, the KCDC said. Daegu accounts for nearly 74 percent of South Korea's total infection cases.

The total number of confirmed cases in Daegu and North Gyeongsang, the two epicenters of the virus outbreak here, stood at 5,990 and 1,153, respectively.

Infection cases in the capital Seoul rose 13 to 238, and surrounding Gyeonggi Province reported 15 new cases for a total of 200.

Despite the clear downtrend in Daegu and North Gyeongsang, the capital area is seeing a sustained volume of new cases, a government official said, calling for continued caution against crowded places and close contact with other people.

"I don't think it's time to loosen up the vigilance as group infections are continuing in the capital area," the official said. 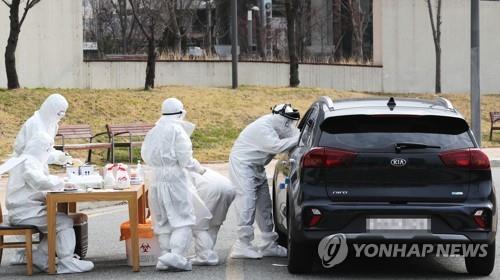 The country has been struggling to cope with a possible cluster infection, after more than 110 cases of COVID-19 were found at a call center in southwestern Seoul.

As of Saturday, infection cases from the call center in Guro, the biggest infection cluster in the capital area, rose to 115, with three new cases added the previous day.

Eighty-two of them were employees of the call center, and the remaining 33 were their family members.

The number of cases in relation with the call center could rise further as the government continues to test the employees and their families and neighbors.

The administrative capital Sejong posted six additional cases, bringing its total infections to 38, while cases in Busan rose by three to 103.

A total of 31 civil servants at the government complex in Sejong have contracted the illness so far.

The total number of COVID-19 patients at the Ministry of Oceans and Fisheries rose by one to 26.

The health authorities said they are in talks with the education ministry over whether to again extend school breaks or not.

In a fresh precautionary measure, the government on March 5 extended child care center breaks by another two weeks to March 22. Spring semesters of all elementary, middle and high schools have already been delayed to March 23.

"Government agencies are split over (extending school breaks), and it needs to quickly determine whether to extend them or not," the official said.

Following up on the announcement, the Ministry of Education said it will make its final decision public next week after discussions with health authorities and education agencies on whether the extension is necessary. 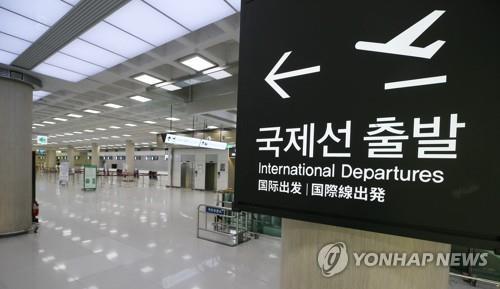 Separately, the Seoul government has been alert over inflows of COVID-19.

Starting Sunday, all people arriving in the country after visiting Germany and four other European countries will face strengthened quarantine as part of efforts to stem imported virus cases.

Entrants from France, Germany, Spain, Britain and the Netherlands will be required to get fever checks and submit papers on their health conditions.

The measures come as many European nations, particularly virus-hit Italy, have reported a spike in new COVID-19 cases, prompting the health authorities here to raise their guard against further imported virus cases.

The World Health Organization declared Wednesday that the global coronavirus crisis is now a pandemic as the virus has spread to every continent except Antarctica.

The number of people being checked for the virus and under quarantine came to 17,634 as of Friday, down 306 from the day before, it said. The country has tested a total of 261,335 suspected cases, the health authorities said.