SEOUL, March 14 (Yonhap) -- A total of 131 countries and territories were imposing an entry ban or stricter quarantine procedures for travelers from coronavirus-hit South Korea on Saturday, the foreign ministry said.

As of 2 p.m., 55 countries and territories, including Uzbekistan and Bosnia-Herzegovina were planning to bar or were barring the entry of travelers who have visited South Korea during the previous two weeks at least, according to the Ministry of Foreign Affairs.

Uzbekistan was banning entry for nationals of several virus-affected countries including South Korea, China and Italy, as well as foreigners who have been in those countries in the past two weeks.

Ukraine will bar the entry of all foreigners on Sunday.

Starting early next week, the Czech Republic will block entry for all foreigners -- except for those with long-stay visas or work permits, who will be subjected to a mandatory isolation for two weeks.

Six countries and territories were enforcing an entry ban on people from parts of Korea -- primarily Daegu city and North Gyeongsang Province -- where the majority of COVID-19 outbreaks have occurred.

The number of countries and territories imposing stricter quarantine procedures, such as a 14-day quarantine at designated facilities, stood at 18, including 22 provinces, cities and autonomous regions in China.

Eritrea in East Africa was added to this list as it was quarantining visitors from South Korea and a few other countries.

Fifty-two countries and territories were imposing stricter immigration controls and requiring or recommending self-isolation for people flying in from South Korea.

On Saturday, South Korea's infection caseload reached 8,086, up 107 from the previous day. It was the third day in a row that the daily new infection tally was in the 100s in South Korea. 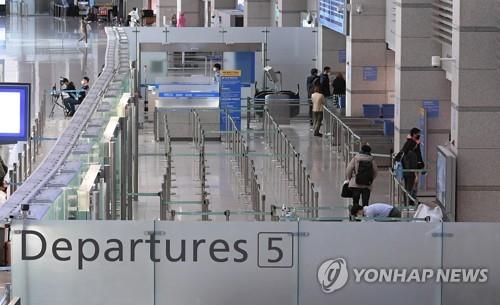