SEOUL, March 16 (Yonhap) -- Despite the intensifying fears over the spread of the coronavirus that have led to shutdowns of local concert halls and museums, classical music fans in South Korea can still enjoy performing arts.

The Seoul Philharmonic Orchestra, which has canceled all of its scheduled shows in March, mapped out a special performance of "Symphony No. 3," or "Heroic Symphony," composed by Ludwig v. Beethoven, and live streamed it Friday through its official YouTube page and Facebook account.

It said the special online program conducted by the orchestra's associate conductor Wilson Ng, with 40 instrumental players, was dedicated to those who have been fighting against the spread of the infectious COVID-19 virus for more than a month. 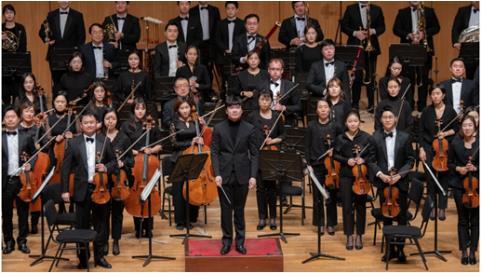 The Sejong Center for the Performing Arts in downtown Seoul will live broadcast an opera program of the Seoul Metropolitan Opera on March 31 on YouTube.

It will replace the Seoul Metropolitan Dance Theatre's performance, originally set for Thursday and Friday last week, with an online edition on April 18.

Its previous famous concerts and recitals will also be released on YouTube for free Monday.

The center, run by the Seoul metropolitan government, has postponed or canceled its original shows and productions for March amid the coronavirus outbreak.

On top of it, Korean traditional music, or "gukak," is also available on YouTube.

The Seoul Donwhamun Traditional Theater has decided to convert all of its scheduled performances at its main venue into online ones.

Seven programs, including a "gayageum" concert by artist Seo Jung-min are subject to the theater's online project for this month.

South Korea has reported nearly 8,300 confirmed cases of the COVID-19 as of Monday, while the national virus alert was raised to the highest level and staying indoors is recommended.