SEOUL, March 18 (Yonhap) -- The number of South Korean listed companies valued at over 1 trillion won (US$806.5 million) has dropped amid a market rout sparked by woes over the economic fallout from the spread of the new coronavirus, data showed Wednesday.

As of Tuesday, the number of such companies stood at 146, 43 firms down from the end of last year, according to the data by Korea Exchange.

A company with 1 trillion won in market capitalization, an equivalent to the "billion dollar club" in the United States, is regarded as a large cap stock in South Korea. 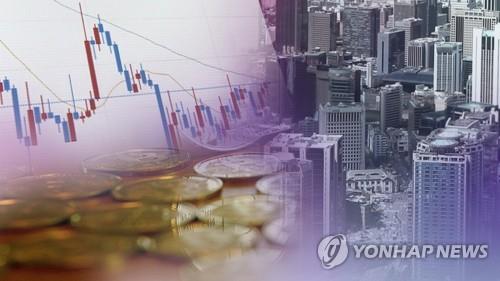 The market cap of market bellwether Samsung Electronics Co. fell by 50.7 trillion won from the end of last year, and No. 2 SK hynix saw its market cap slide 58.5 trillion won over the cited period.

Samsung SDI's market cap grew 700 billion won, on the other hand, being the only player among the top 10 market cap stocks.

Taking a cue from the Federal Reserve's emergency rate cut, the Bank of Korea (BOK) on Monday slashed the key rate by half a percentage point to 0.75 percent.

At the first emergency meeting in a decade, the BOK governor said the country's economic growth projection will have to be revised down, as COVID-19 spread much faster and wider than expected.

In February, the BOK had slashed its growth estimate for the South Korean economy to 2.1 percent from 2.3 percent forecast late last year.