DAEGU, March 18 (Yonhap) -- Another cluster transmission of the new coronavirus has infected more than 70 people at a nursing hospital in the southeastern city of Daegu, the epicenter of the local outbreak, city government officials said Wednesday.

The Daegu Metropolitan City Government said a total of 74 people, including 57 patients and 17 medical staff, from the nursing hospital have tested positive for the COVID-19 virus. 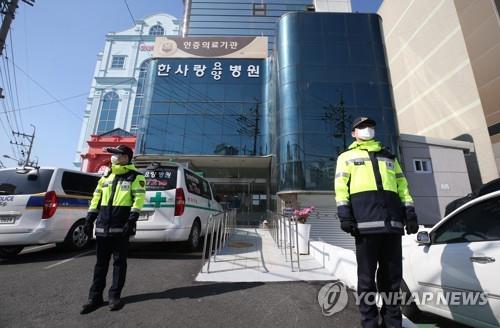 The facility was immediately put into cohort isolation as part of the city government's latest efforts to isolate medical facilities that report cluster infections.

Cohort isolation is the separating of a group of patients with the same infectious disease from others. The method has been proven effective in preventing the further spread of disease within medical facilities.

"We are preparing for countermeasures," a city government official said, adding that the city government is looking into all of some 380 nursing hospitals and social welfare facilities in the city.

The country recorded daily new infections of the new coronavirus in the double digits for the fourth straight day, bringing the nation's total infections to 8,413, the Korea Centers for Disease Control and Prevention (KCDC) said.

The pace of daily new infections has slowed markedly as the KCDC completed extensive testing of 210,000 Shincheonji followers at the center of the rapid spread, but the authorities are still on high alert over new clusters of infections, including at a call center in Seoul's Guro district and a new case linked to a church in Seongnam.