SEOUL, March 19 (Yonhap) -- Back in North Korea, Ji Seong-ho saw elections as nothing more than a formality, because even a vote against the ruling Workers' Party-picked candidates, let alone criticism of the government, could land voters in prison.

Running for office was an unthinkable privilege reserved for elites and well-connected people.

That's why, after coming to South Korea, Ji, known for his surprise appearance at U.S. President Donald Trump's State of the Union address in 2018, was stunned to see candidates feverishly campaigning and people passionately debating policy and freely criticizing their president.

After more than 10 years of living in South Korea, Ji is now planning to run in the April 15 general elections for a National Assembly seat, with the goal of helping North Korean defectors and people still suffering in the country he escaped from.

"If elected, I hope to contribute to enacting laws that help improve human rights situations in North Korea and to draw up policies to support North Korean defectors, like me," he said in a recent interview with Yonhap News Agency. 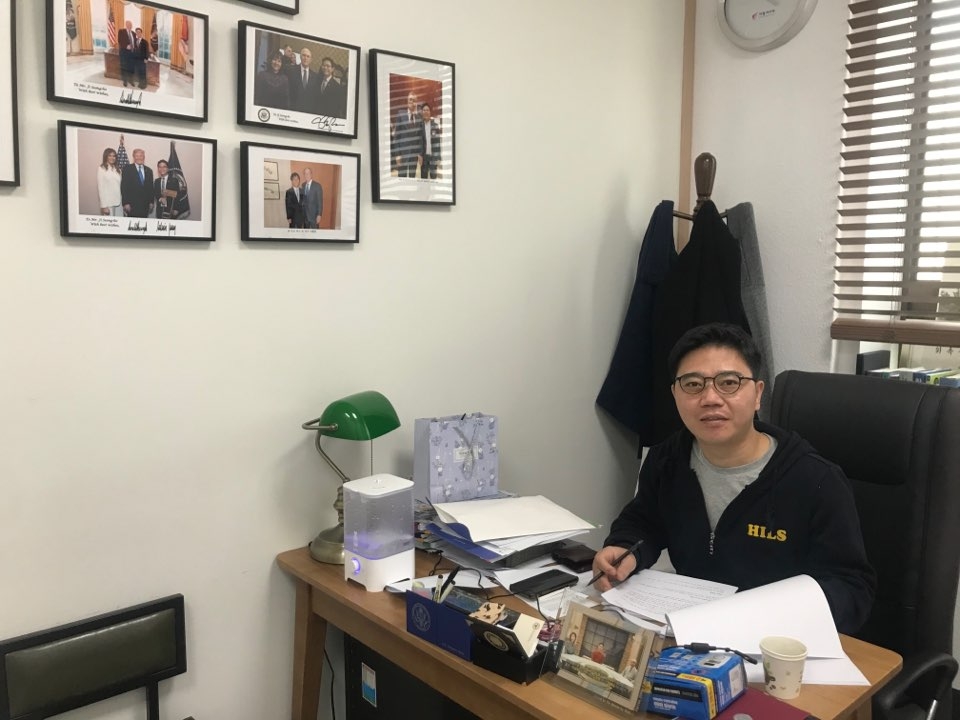 Ji, 37, lost his left arm and leg in a train accident in North Korea while stealing coal. During the State of the Union address, he triumphantly raised his clutches as he was introduced, drawing a standing ovation from the audience.

Earlier this year, South Korea's main opposition Liberty Korea Party, which was later renamed the United Future Party, scouted him as a new face, as the conservative party sought to regain public support ahead of next month's elections.

Ji's entry into politics came as more North Korean defectors are eyeing politics as a channel to voice their opinions and complaints over government policy as the number of defectors in South Korea has been growing.

Thae Yong-ho, a former No. 2 North Korean diplomat at North Korea's embassy in London, is another defector who joined the main opposition party and tossed his hat into the ring.

Thae, who defected to the South in 2016, has garnered special attention as he is to run in the affluent Gangnam region in southern Seoul. If elected, he would become the first North Korean defector to enter the National Assembly through direct voting, not through proportional representation.

He said that his victory could give hope to North Koreans aspiring for freedom and help the two Koreas move toward unification.

"I solemnly promise to devote myself in building a unified Korea through parliamentary activity," Thae said at a press conference at the National Assembly in February. 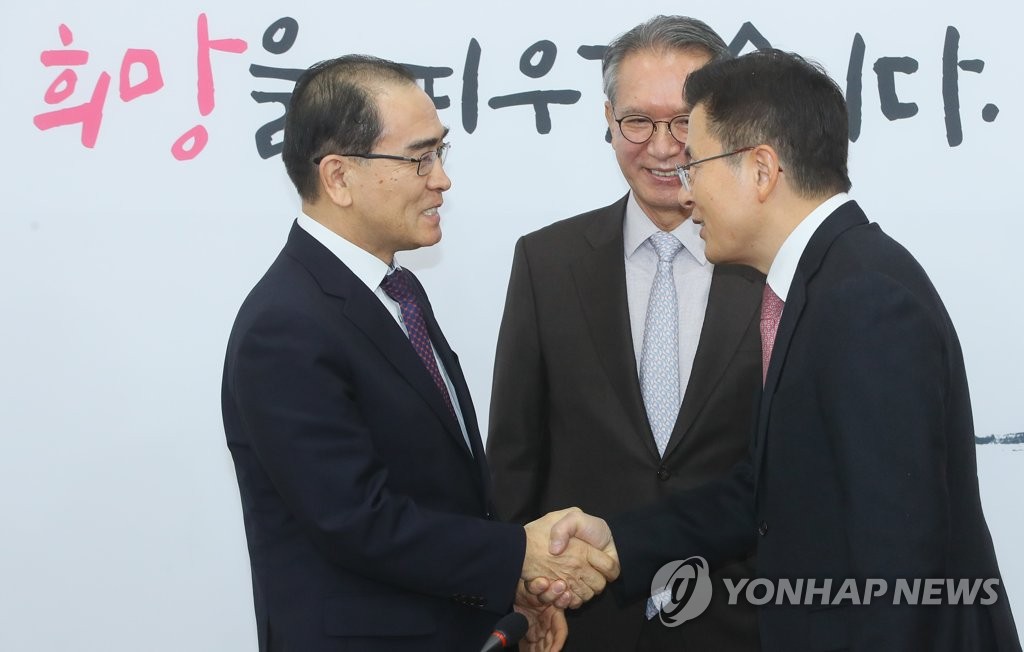 More than 33,000 North Korean defectors live in South Korea. As their number has been on the rise, so has demand for increased benefits and support for their resettlement here.

Pent-up complaints came to the fore when a North Korean defector and her young son were found dead in their apartment, presumably due to starvation.

The tragedy was followed months later by the government's controversial decision to deport two North Korean fishermen suspected of killing 16 other crew members back to the home country without a trial and against their will.

The government vowed to intensify efforts to provide better support for North Korean defectors placed under the "blind spot" of resettlement benefit. It also defended the repatriation decision, calling the fishermen "criminals" who had to be sent back to protect the safety of the South Korean public.

Thae cited the deportation, among other matters, as a major reason why he eyed politics.

"I felt huge frustration at their repatriation, separately from talks over whether they were criminals or not," he said. "To prevent reoccurrence of the incident, I've come to think that I have to do parliamentary activity.

Earlier this month, a group of North Korean defectors declared the launch of a political party for the first time, vowing to work toward "liberating" people in their homeland from autocratic rule and promoting the rights of defectors.

"Political parties have paid attention to what we have said during election seasons, only to have our demands have on deaf ears after elections," Ahn Chan-il, a co-chair of the newly-launched party, said. 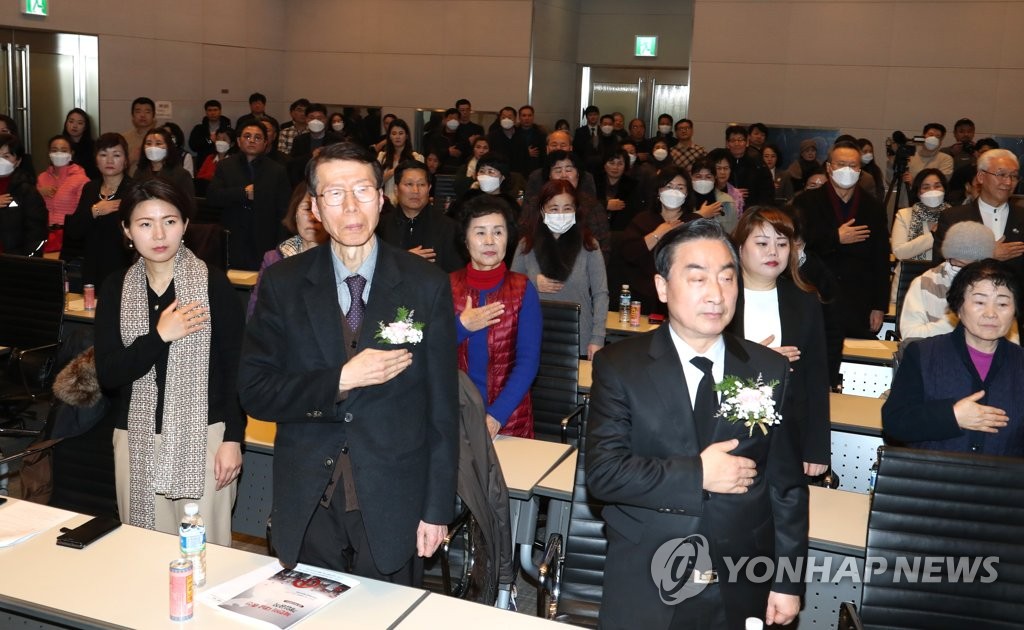 No matter what their chances of getting elected might be, supporters see such active political participation as positive, hoping that it can help draw attention to human rights situations in the North and living conditions for defectors here in the South.

Critics question whether a few vocal politicians could represent more than 33,000 North Korean defectors, most of whom stay silent. Some worry that North Korea's issues could be extremely "politicized," thereby causing unnecessary noise in the process of handling matters related to the North.

"North Korean defectors are a minority and mostly underprivileged people in South Korea. Given that they need to have a platform to voice their opinions, their increased interest in politics could be meaningful in itself," a professor at a university in Seoul told Yonhap on condition of anonymity.

"Doubt still persists over the possibility of over-representation by a few vocal people who appear to me to have strong personal political aspirations," he added. "There are also concerns that they, if elected, could turn North Korea issues into a matter of unproductive political strife."

There are also doubts whether any of them can win a parliamentary seat this time around.

Of the two best-known candidates, Ji recently placed low on the list of candidates presumed to be safe to be elected through proportional representation, raising the possibility that he could drop his bid.

Thae might have a higher chance as he is to run in a district regarded as a stronghold for the conservative opposition, but some say that he could face an uphill battle in overcoming unspoken biases against North Korean defectors.

Despite uncertainty over his electability, Ji earlier said recent active political participation by North Korean defectors might point to growing demand for a "channel" by which to make their voice better heard.

"After looking at how our voices have been ignored over and over again, people seem to have realized that, as individuals, they aren't a match against the government," he said. "A consensus has been created that they should voice their opinions on a level playing field and politics must be a way to do so."

"They have chosen politics as a channel. The absence of such a channel in the North might have prompted them to defect in the first place," he noted.