SEOUL, March 19 (Yonhap) -- Two South Korean military transport aircraft arrived back from Myanmar on Thursday, completing their mission to bring 80,000 sets of surgical gowns for use in the battle against the new coronavirus, officials said.

The Air Force C-130J planes arrived at Gimpo International Airport in western Seoul at around 4 a.m., some 20 hours after departing for the Southeast Asian country. It was the first time that military planes have been mobilized to take commercial goods into the nation.

The gowns are part of what the Seoul government has purchased from a South Korean company that runs a production line there and will be transferred to medical facilities across the country to be used at COVID-19 screening centers, according to the defense ministry.

The decision to mobilize the military aircraft came as the national air carrier Korean Air's route connecting the two countries was suspended over the spread of the novel virus. The government also took advantage of the relatively shorter and simpler screening process for military aircraft given the urgency around the virus situation, according to the officials.

South Korea has made all-out efforts to contain the coronavirus. As of Wednesday, South Korea had 8,413 confirmed cases, including 84 deaths, according to the Korea Centers for Disease Control and Prevention (KCDC). 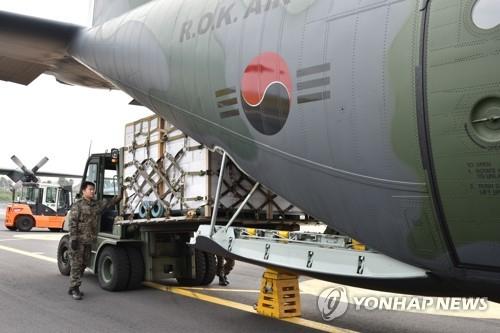 S. Korean planes arrive back from Myanmar with medical gowns in anti-virus efforts

S. Korean planes arrive back from Myanmar with medical gowns in anti-virus efforts