SEOUL, March 19 (Yonhap) -- South Korea was hit by typhoon-class strong winds on Thursday, which caused a number of injuries and forest fires, as well as massive damage to outdoor facilities, across the nation.

The weather agency issued its first-ever strong wind warning for Seoul, where an instantaneous maximum wind speed reached 16.3 meters per second, the most powerful wind since 28.3 mps was recorded during the onset of Typhoon Lingling last September. 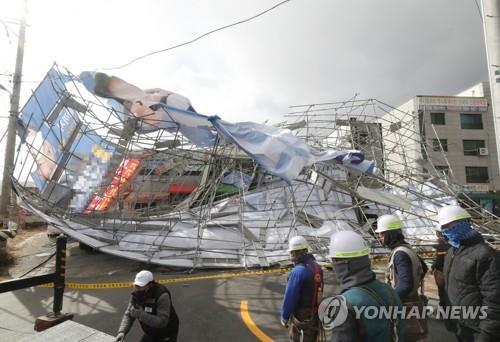 KMA officials explained that the unseasonably strong winds were caused by the difference in air pressure between cold low pressure over North Korea and warm high pressure southeast of the peninsula.

It is the first time since the KMA began relevant record-keeping in 1999 that Seoul has been put under a strong wind warning.

The agency noted a maximum wind speed of 32.1 mps was recorded in Yangju, north of Seoul, as of 3 p.m., while Mount Seorak near the east coast and Incheon, west of the capital, logged per-second wind speeds of 32.5 mps and 24.3 mps, respectively.

In particular, KMA officials urged hospitals and clinics nationwide to ensure that their makeshift tents and other outdoor medical facilities set up to handle suspected and confirmed patients of the coronavirus are not damaged by the strong winds.

"Winds will grow gradually stronger, reaching the maximum speeds towards the evening. As the atmosphere is very unstable, whirlpool gusts are also expected," a KMA official said.

He called for extraordinary countermeasures to secure the safety of makeshift hospital tents related to COVID-19, church spires, storefront signs, walls, greenhouses and other outdoor facilities, while asking people to stay indoors throughout the day.

The KMA also cautioned against forest fires, saying small embers could lead to big fires, particularly in eastern coastal and inland areas, due to the dry atmosphere.

According to the Korea Forest Service, a total of 15 forest fires occurred nationwide as of 6:00 p.m. in the aftermath of the unusually strong winds. 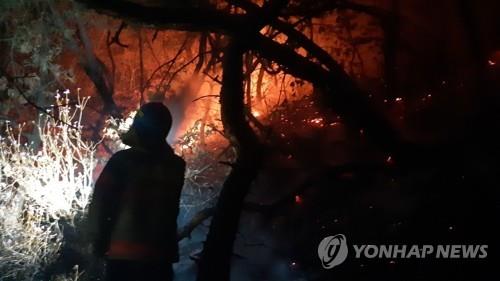 A blaze broke out at around 1:47 p.m. at a mountain valley in Ulju County in the southeastern city of Ulsan, burning about 100 hectares of forest, according to fire fighters and city government officials. The fire is likely to continue overnight, they said.

About 2,200 fire fighters, police officers, and city government officials, as well as 30 fire trucks, were sent to the scene, they said

The city government said some 4,000 residents living near the mountain have been evacuated, with no casualties reported so far.

A chartered helicopter carrying two crew crashed during a mission to contain the fire at around 3:30 p.m, according to the fire service.

Of the two aboard, one was rescued and one remains missing, it said. The exact cause of the accident is not immediately known.

The city government and county office chartered a civilian chopper and dispatched it to the wildfire scene.

The captain reportedly issued a distress call before the crash. A rescue operation to find the other crew member is underway.

Around 3:30 a.m., a fire broke out on Mount Surak in Seoul's northern ward of Nowon, burning about 660 square meters of forest. About 1,500 firefighters and civil servants were mobilized to the scene and put out the fire five hours later. No casualties were reported, and firefighters began their investigation into its cause.

Another forest fire, apparently related to the ongoing strong winds, was reported in Wonju, about 130 km east of Seoul in Gangwon Province, around 7 a.m., though it was extinguished in two hours and caused no casualties.

Another small-sized fire broke out at a valley near Goheung, 485 kilometers south of Seoul, around 3:30 p.m., though it was extinguished in about two hours and caused no casualties. 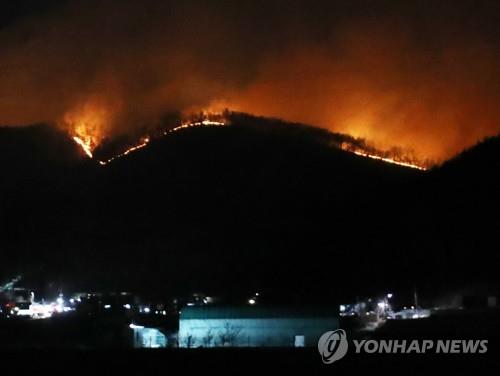