Presiding over an emergency meeting of major commanders, Park also ordered military units to mobilize more troops and devices for the guard operations and improve their current reporting system, the JCS said.

The meeting was aimed at devising and implementing more "pragmatic and fundamental measures" to prevent any recurrence of such intrusions, based upon what was discussed during a separate meeting presided over by Defense Minister Jeong Kyeong-doo on Tuesday, according to ministry spokesperson Choi Hyun-soo.

In the latest security failure case, an intoxicated man in his 50s dug under the fence surrounding an air defense outpost in Siheung, south of Seoul, on Monday and went inside, according to the JCS.

The case came less than two weeks after the military failed to detect two civic activists intruding into a naval compound on the southern island of Jeju and wandering around for about two hours.

The authorities also belatedly disclosed another case that happened on Jan. 3 in which a mentally ill man in his 70s got into the Jinhae Naval Command in the southeastern city of Changwon without being stopped.

"Senior officers should first understand how serious the situation is, and do their best to make sure the military can be trusted by the public," Park said during the meeting.

He ordered all service members to commit themselves to their "original mission with desperation, thinking that there is no inch of ground to step back," the JCS said in a release.

The military also ordered intensive training for all troops on guard duty and random monitoring to tighten their discipline.

Regarding the intruders, the JCS said it will demand the police to take stern action against them, warning that, in the worst case scenario, such intruders can be mistaken for enemies and "unexpected situations" could follow. 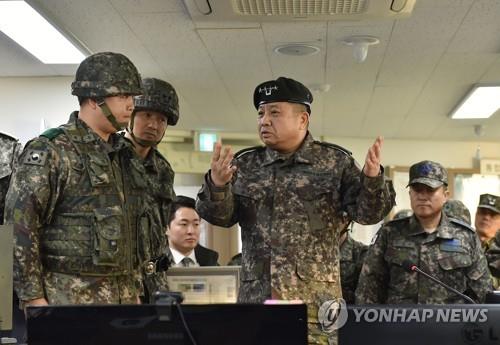