SEOUL, March 19 (Yonhap) -- The number of South Korean and foreign travelers arriving here after contracting the new coronavirus abroad has been on a steady rise, authorities said Thursday, amid recent signs of a downturn in the nation's community transmissions.

According to government data, 55 people, including 47 South Korean nationals, had been confirmed as COVID-19 patients after entering the country from overseas, as of Tuesday.

The foreigners found to be infected during or after the immigration process included six Chinese people, one French person and one Pole.

All told, 27 arrived from Europe, with Italy and France accounting for nine and seven arrivals, respectively. 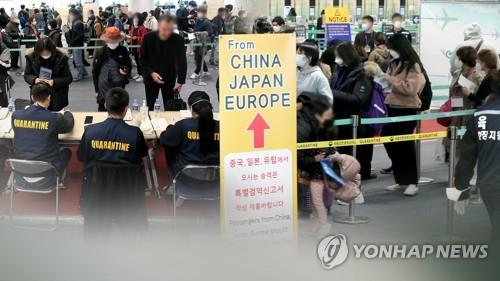 Government officials fear a further spike in the number of imported COVID-19 cases, as overseas South Korean residents and students are return home in large numbers to escape from the coronavirus spreading in their host countries, particularly those in Europe.

A 26-year-old Busan woman, who returned home Tuesday after traveling through Europe for a month, tested positive for the coronavirus on Thursday.

A 24-year-old Swiss national residing in Busan has also tested positive after arriving at Incheon International Airport, west of Seoul, from the European country on Monday.

Two other Busan citizens, who returned home last week after traveling to Italy and Spain, respectively, for over one month, were also confirmed as coronavirus patients Wednesday.

In Seoul, eight people were declared infected earlier this week after traveling or staying in Spain, France, Britain and other foreign countries. One of them, a 23-year-old university student, caught the virus after traveling to New York and other U.S. cities.

A 30-year-old resident of Changwon in the southeastern province of South Gyeongsang was found to be infected Tuesday after returning from honeymoon in Europe.

Effective Thursday, the government expanded its special quarantine procedures to people coming from all countries as concerns about the imported cases are rising after COVID-19 was declared a pandemic.

Seoul's quarantine authorities have urged people to delay or cancel nonessential overseas travel to help curb the coronavirus outbreak, which has so far infected 8,565 people here.