According to the Korea Meteorological Administration (KMA), unseasonably strong winds with an instantaneous maximum speed exceeding 100 kilometers per hour blew across the country, causing a number of injuries, destroying building roofs and windows, spreading mountain fires and forcing the cancellations of domestic flights and ferry services. 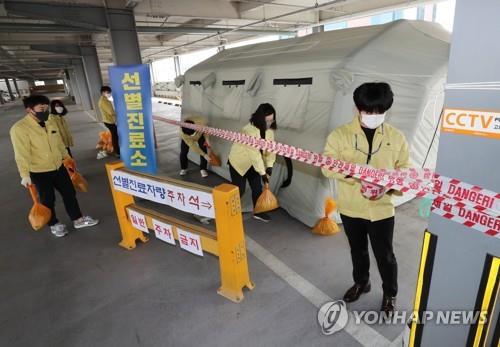 The strong winds, caused by air pressure differences over the Korean Peninsula, forced the KMA to issued its first-ever gust warning for Seoul and many other parts of the nation.

Notably, the wind storm forced 43 of the nation's 637 temporary triage centers set up for screening potential COVID-19 cases to temporarily halt their operations to avoid damage to their outdoor facilities, the Ministry of the Interior and Safety said.

All told, 240 makeshift coronavirus facilities, including triage tents, out of 1,160 outdoor facilities were temporarily shut down, the ministry said, as the number of confirmed coronavirus cases in the country reached 8,565 as of Thursday.

According to the National Fire Agency, the strong winds left behind a large number of injured people, including eight hospitalized, and extensive property damages at about 300 locations nationwide.

All of the four hospitalized were hit by stray flying objects, such as broken roof fragments and windows, the agency said.

According to the Korea Forest Service, a total of 23 forest fires occurred nationwide, apparently in the aftermath of the unusually strong winds. In Ulsan, southeast South Korea, a chartered helicopter crashed during its mission to contain a forest fire, injuring one of two pilots and leaving another missing.