SEOUL, March 20 (Yonhap) -- South Korea has seen an increase in TV viewing over the last few weeks as the rapid spread of the infectious coronavirus has kept more people at home, industry data showed Friday.

TV watching in South Korea jumped about 16.6 percent between the second and fourth weeks of February, when the number of COVID-19 patients picked up sharply, according to the data compiled by Nielson Korea.

The country reported less than 29 confirmed cases of the virus from Feb. 10-16, but the number surged to 602 a week later and to 3,736 for the fourth week of last month.

Nielson Korea said the rise in weekly TV usage came as the South Korean government raised the virus alert to the highest level in the final week of February and asked the public to refrain from outdoor activities.

The extended school closure and homeworking also affected TV viewing, as day-time watching rose over the cited period, it added.

"We can see that the spread of COVID-19 infection has helped people spend more time watching TV," Nielson Korea said. "TV viewing will likely be on a steady rise as the government recommends homeworking and has postponed the start of the semester due to the lingering concerns over community infection." 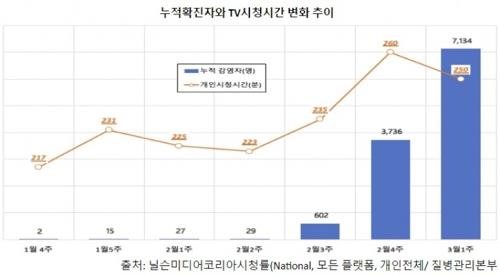