SEOUL, March 20 (Yonhap) -- South Korea will conduct new coronavirus tests on all arrivals from Europe and require them to self-isolate for two weeks as part of ongoing efforts to guard against imported cases of the novel coronavirus, the country's health authorities said Friday.

The measures, to be effective starting Sunday, are the latest in a series of stepped-up quarantine moves by the country amid growing concerns over a rise in imported virus cases.

The country will require all returnees from European nations to get tested for the virus, and if a person arrives in South Korea from Europe for a long-term stay, he or she will be required to self-isolate at home for two weeks, even if they test negative for COVID-19, according to the Korea Centers for Disease Control and Prevention (KCDC).

If the person has no home in South Korea, they will be sent to an isolation facility, according to Yoon Tae-ho, a senior health ministry official who is in charge of containment measures. 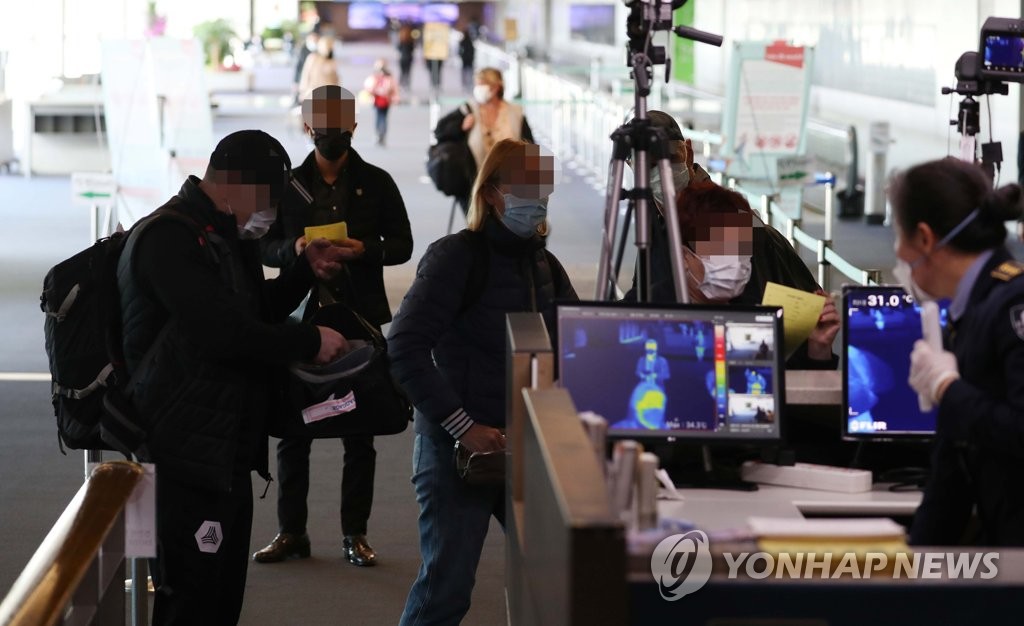 If a foreigner arrives in South Korea from Europe for a short-term stay, health authorities will check his or her health condition on a daily basis by telephone.

The health authorities are also considering expanding such measures to passengers from the United States and other Asian countries. The Korean government will pay the cost of their quarantine, Yoon said.

Anyone, Korean national or foreigner, who violates the rules on self-isolation will be punished under Korean law, the official said.

In South Korea, a person will face a fine of up to 3 million won (US$2,387) if the person violates the rules on self-isolation.

The authorities said it has secured special facilities that people can stay at as they await results of the tests.

Since Thursday this week, South Korea has imposed special quarantine measures for all new arrivals from abroad. The number of people entering the country on average per day recently is about 6,400, with around 1,000 coming in from Europe.

Since the first reported case here on Jan. 20, 86 infections are suspected to have originated overseas, including 50 thought to have been imported from Europe.

According to the KCDC, of arrivals from Europe with fever and other symptoms, 5 percent have tested positive for the novel coronavirus -- a high percentage that clearly indicates how widespread community transmission is there.

South Korea has reported 8,652 confirmed cases in the country as of Friday. Health authorities said that from Saturday through Wednesday, they detected 17 cases of infection from arrivals.

South Koreans and foreign nationals alike are subject to the strict measure, and all entrants to the country must undergo fever checks at air terminals and seaports, according to the health authorities.

Those who have a cough, sore throat and other symptoms believed to be related to COVID-19 must write down their condition on a health questionnaire. All arrivals are required to provide the address they will be staying at and contact information such as a phone number to authorities.

People also have to download a self-check app that will allow them to regularly report their state of health online. Those who feel unwell for two consecutive days will be contacted by a community health service center that will determine if the person needs to be tested for viral infection.

Seoul earlier imposed tighter quarantine checks on people arriving from countries most affected by the pandemic, including China, Japan, Iran, Hong Kong and Macau and all European nations.