SEOUL, March 21 (Yonhap) -- Drive-thrus are spreading across many sectors of South Korean society lately, following the success of the nation's drive-thru coronavirus testing centers that have been praised by foreign media for their safety, efficiency and speed.

Schools and pubic libraries have adopted the method in the distribution of books, while restaurants and retailers are allowing their customers to pick up food or products while staying inside their cars. 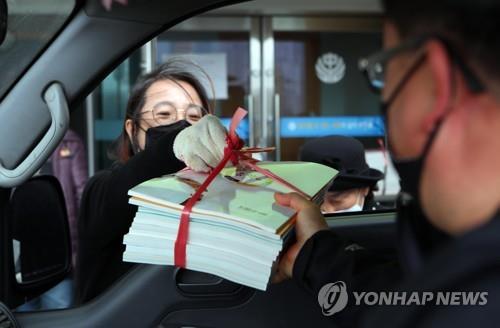 Drive-thru systems, allowing people to buy goods or receive services without leaving their cars, have been gaining increasing popularity, as more and more people are reluctant to make direct contact with others amid the COVID-19 scare.

A number of coronavirus triage centers in South Korea have set up drive-thru style facilities, where medical staff lean through car windows to check drivers' fevers and respiratory symptoms and take their samples in less than 10 minutes.

The drive-thru virus testing method has won much applause from foreign media and been imported by the United States, Japan and many countries in Europe.

Taking a cue from the coronavirus clinics, a number of non-medical public institutions and private businesses here have also adopted the innovative drive-thru method. 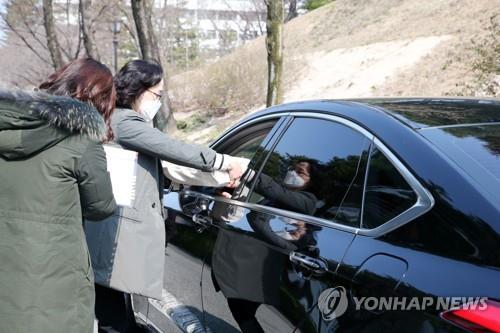 Pohang Jecheol Middle School in Pohang, a North Gyeongsang Province city hit hard by COVID-19, distributed textbooks for the spring semester to the parents of its students in a drive-thru earlier this week.

Homeroom teachers put a set of 14 textbooks in a bag in advance and then delivered them when the parents came to the school by car.

At the request of the provincial educational office, many other secondary schools also handed out textbooks in a drive-thru system, drawing favorable responses from parents who want to avoid contact with others in waiting rooms.

Parents of Jeju Jeil Middle School on the southern resort island of Jeju also received their children's textbooks from inside their cars Thursday.

Elementary, middle and high schools were supposed to begin their spring semester on March 2, but the start date has been delayed to April 6 due to fears of virus transmissions in classrooms. 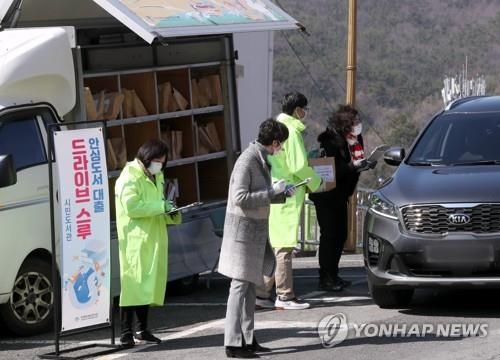 In Daegu, which accounts for over two-thirds of Korea's confirmed coronavirus cases totaling 8,652 as of Friday, a restaurant has drawn media attention for selling pork chops in a drive-thru method. Its customers can order pork chops by phone before picking them up from inside their cars.

In Pohang, an association of regional fish farmers sold 800 sushi lunch box sets to residents and visitors in a drive-thru system last weekend.

A number of public libraries in Seoul, Busan, Ulsan, Cheongju and other cities have recently launched a service to lend books via a drive-thru system.

In most cases, citizens log into the library websites and select books to borrow before picking them up at the entrance of a library the following day.

The municipality of Changwon, southeastern South Korea, began a toy rental service based on the drive-thru system for its residents on Friday. Its citizens can make a phone reservation for up to two toys and pick them up the following day while in their cars.

Among retailers, the Gwangju branch of Lotte Department Store last Tuesday launched a "drive-up and pick-up" service for its customers who complete an online payment for their desired goods in the company's app. 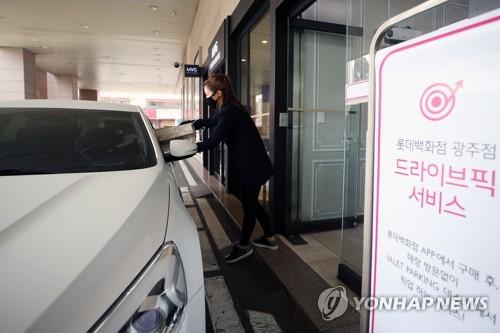