SEOUL, March 20 (Yonhap) -- South Korea will continue to stage planned combined exercises with the United States in an adjusted manner, though an annual springtime drill was postponed in the wake of the coronavirus outbreak, Seoul's defense minister said Friday.

The springtime exercise, named the Combined Command Post Training (CCPT) 20-1, had initially been planned for early March, but the allies decided late last month to postpone it due to concerns over the COVID-19 situation.

It was the first time that joint exercises between the two countries have been postponed for health-related issues, though they have made such decisions over the past couple of years to support diplomatic efforts to convince North Korea to give up its nuclear program.

"However, other planned combined exercises and training will continue to be implemented through flexible modification of their scale and methodology," Minister Jeong Kyeong-doo wrote in an op-ed piece contributed to the Defense News, a U.S.-based online news site.

Jeong pointed to growing military threats caused by "increased military activities from neighboring countries and the continued development of weapons in North Korea."

After months of hiatus, the North resumed major weapons tests earlier this month and has fired short-range projectiles twice so far, which are believed to have come from its super-large multiple rocket launcher system, according to Seoul's Joint Chiefs of Staff (JCS). 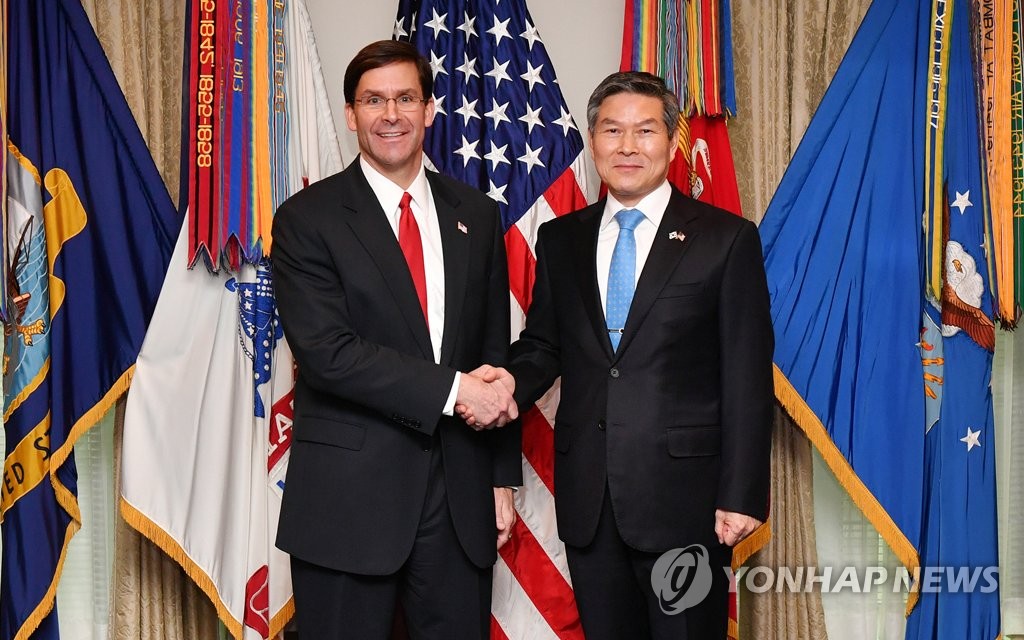 Speaking of negotiations between Seoul and Washington for the Special Measures Agreement (SMA) that regulates their cost-sharing for the upkeep of the 28,500-strong U.S. forces on Korean soil, the minister reiterated their stance of reaching a "fair and mutually agreeable level."

He also pointed to South Korea's additional spending of around US$7 billion per year to guarantee stable conditions for the U.S. Forces Korea and to further boost combined defense posture, and vowed to continue such support.

Since September 2019, South Korea and the U.S. have held seven rounds of SMA talks, including this week's session. But they have failed to narrow differences, with the U.S. demanding a hefty increase in Seoul's financial contribution.

As the latest sphere of collaboration between the two sides, the minister cited the novel coronavirus.

"The ROK and the U.S. are overcoming the nonmilitary threat of COVID-19 together by conducting combined quarantine operations and sharing information and medical support for the disease."

Pointing to the soured relations between South Korea and Japan, Jeong called on the U.S. to take "an active role" toward improvement for the sake of trilateral security cooperation.

He also noted the importance of continued cooperation between South Korea and China for North Korean issues and economic interests, but pledged that security issues related to Beijing will be handled on the basis of the alliance with the U.S.