The figure was down from the U.S.' initial call for a fivefold increase to $5 billion in Korea's share of the cost for the upkeep of the U.S. Forces Korea (USFK), but Seoul officials believe that the figure is still unrealistically high.

"Basically, there wasn't a change in the proposed amount of Seoul's contribution in last week's talks," the source said on condition of anonymity.

South Korea's top negotiator Jeong Eun-bo and his U.S. counterpart, James Dehart, held a seventh round of negotiations on the cost-sharing deal, called the Special Measures Agreement (SMA), in Los Angeles from Tuesday through Thursday. But they failed to narrow differences.

In the talks, Seoul appeared to have expressed a willingness to pay more than its earlier proposal of about a 10 percent increase. But the U.S. is known to have rejected the revised proposal.

Since the start of SMA talks last September, the U.S. has been calling for a hefty rise in Korea's payments, a demand that sparked criticism that Washington focuses more on pecuniary interests of the alliance rather than on its strategic value for regional stability.

Along with Seoul's payments, the issue of Korean workers in the USFK facing furloughs absent a deal to fund their wages has been a bone of contention.

Seoul had proposed that an arrangement apart from the SMA be struck first to prevent the Korean employees from being furloughed starting next month as the USFK has repeatedly warned.

But Washington has opposed that proposal on concerns that it could further delay the negotiations for a comprehensive SMA, Seoul's top negotiator Jeong told reporters on Saturday.

Hopes for a last-minute deal have yet to fade out, as the two sides agreed to continue consultations through various communication tools such as phones and email or through embassy staff while avoiding face-to-face contact due to coronavirus concerns.

"As the issue at this point is how to agree on the figure, it does not necessarily require the two sides to meet face to face," the source said.

"Things have become difficult, but that doesn't mean that the two sides will give up on efforts to conclude the deal within this month," the source said. 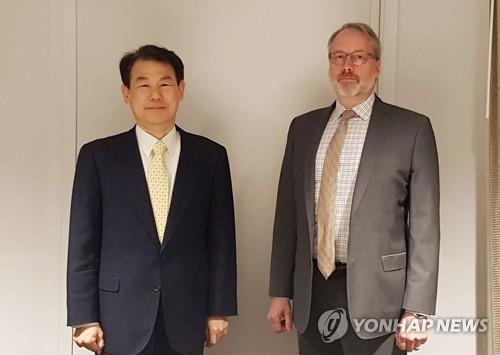