SEOUL, March 23 (Yonhap) -- South Korea is considering sending a chartered flight to South Sudan to bring back some of its peacekeeping troops amid coronavirus concerns, the defense ministry said Monday.

About 210 rotational troops of the 270-strong Hanbit Unit are expected to return home without replacement, after the African country asked Seoul and other foreign countries not to send fresh troops in the wake of the spread of the COVID-19 virus across the globe.

"We have had close consultations with the host nation, the U.N. and other countries for stopover destinations with regards to sending a chartered flight," ministry spokesperson Choi Hyun-soo told a regular briefing.

The move aims to guarantee their right to vote in the parliamentary elections slated for April 15, among others, Choi said, adding that some service members are also supposed to be discharged from the military next month.

It has yet to be decided when to fly the chartered flight, though South Korea is pushing to bring the service personnel home "as soon as possible," according to another ministry official.

The remaining 60 troops will stay there to perform basic surveillance duties until a replacement contingent arrives.

"We are also working to send the fresh 12th batch at the earliest possible date, though there exist some difficulties due to travel restrictions imposed by some related countries due to the coronavirus" he said.

As of Monday, 176 countries and territories were enforcing travel curbs on people from South Korea as part of efforts to cope with the epidemic.

South Korea began troop deployments to South Sudan in 2013 at the U.N.'s request in accordance with a U.N. Security Council resolution aimed at assisting peaceful reconstruction work. The African nation declared its independence from its Arab-dominated northern neighbor Sudan in July 2011 after decades of civil war that killed more than 2 million people. 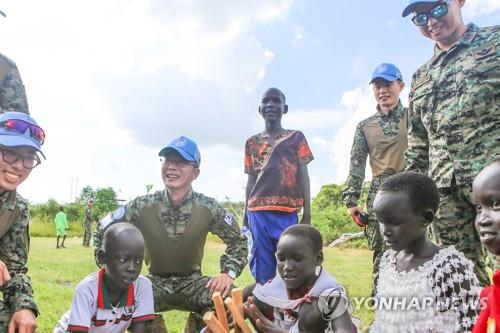